John Tilley was a lifelong bachelor and a man of many interests and although he never married John had two great passions. 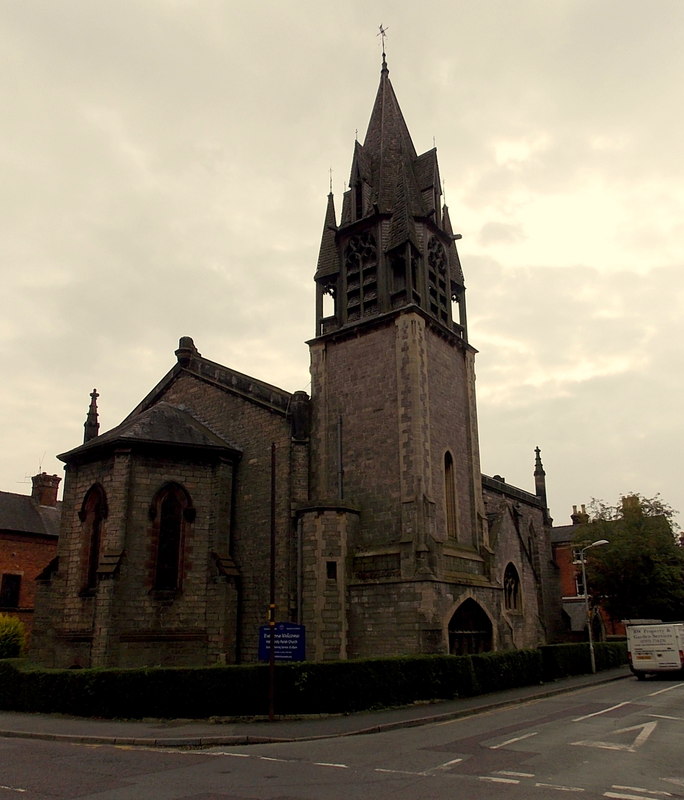 John Francis Tilley became totally immersed in the life of Oswestry School and Holy Trinity Church, with music being the common thread. Much of his time on Sundays was spent cycling between his church, where he was organist/choirmaster, and School House often playing the organ both at Holy Trinity and in the School chapel.

In addition to this, he somehow found time to host Sunday afternoon teas at his home in Whittington, and I am told by Roger Dennis, who was at school for most of the sixties, that John used to take small groups of boarders to dinner at The Prince Rupert in Shrewsbury where they indulged in alcohol for the first time and, as a result, Roger's mile time suffered two days later. The organisation of school trips was high on JFT's list of priorities and I am grateful to Roger Dennis for supplying me with a photograph of the School trip to Norway circa 1966 during which Roger was almost swallowed up and lost in the mouth of a glacier. 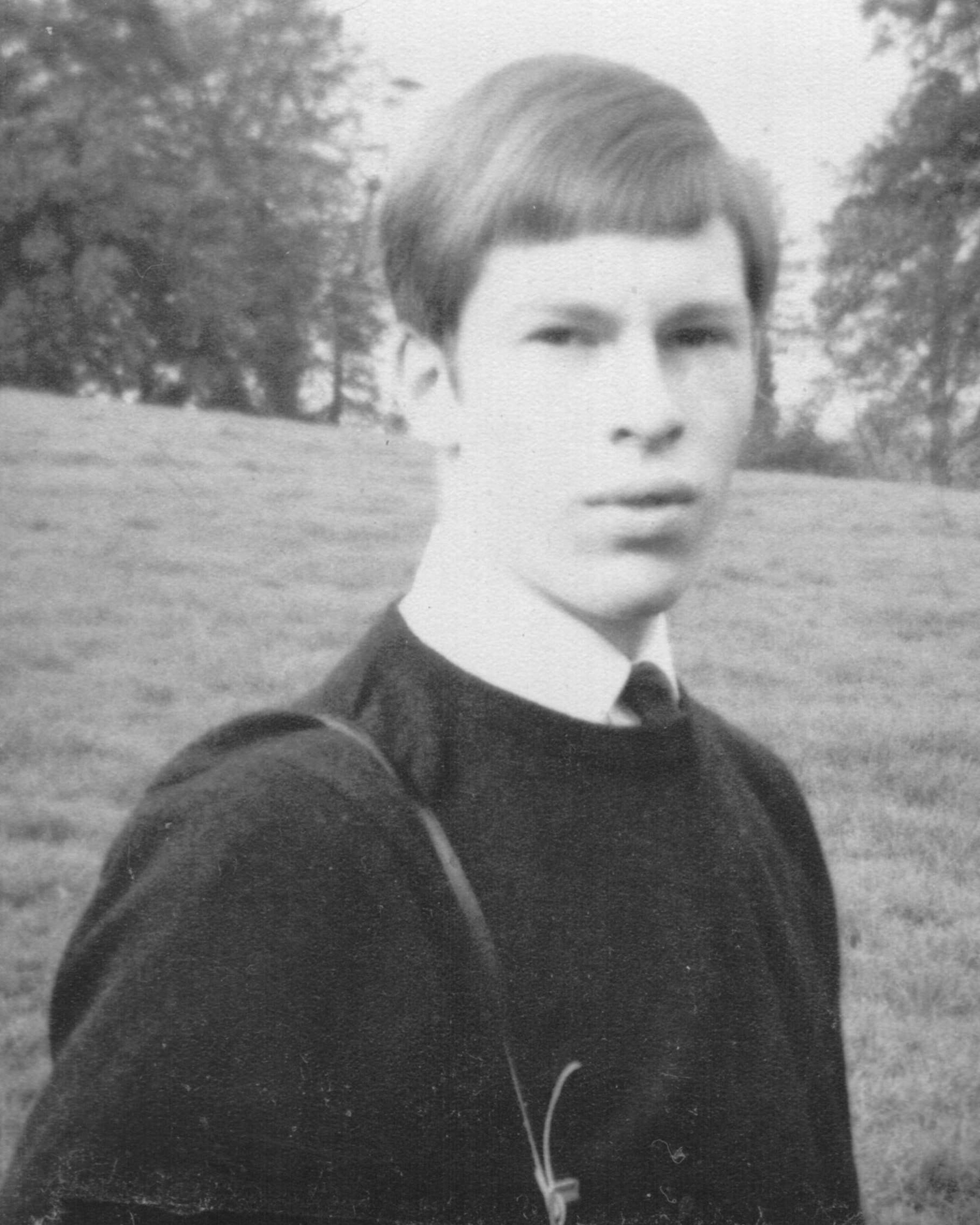 John enjoyed springing surprises during his outings on school trips and he always seemed to be able to find a watering hole at random places, no matter how remote the location. To all appearances, the thirsty party would suddenly stumble upon a cafe or a bar out of the blue, for much-needed refreshment.

However, this was not quite as random as it appeared. Purdy prepared his trips in meticulous detail, often going on dry runs during school holidays, and it was on these forays abroad that he searched for his 'surprises' which were often in very remote areas.

It is only recently that I learned of the amount of research JFT put into his school trips and it is typical of this splendid geography/history Master who prepared his lessons with the same amount of diligence. There is no doubting John's ability to make his  A level history and geography tuition periods interesting, and I am still very much interested in the subjects today, probably as a result of that. 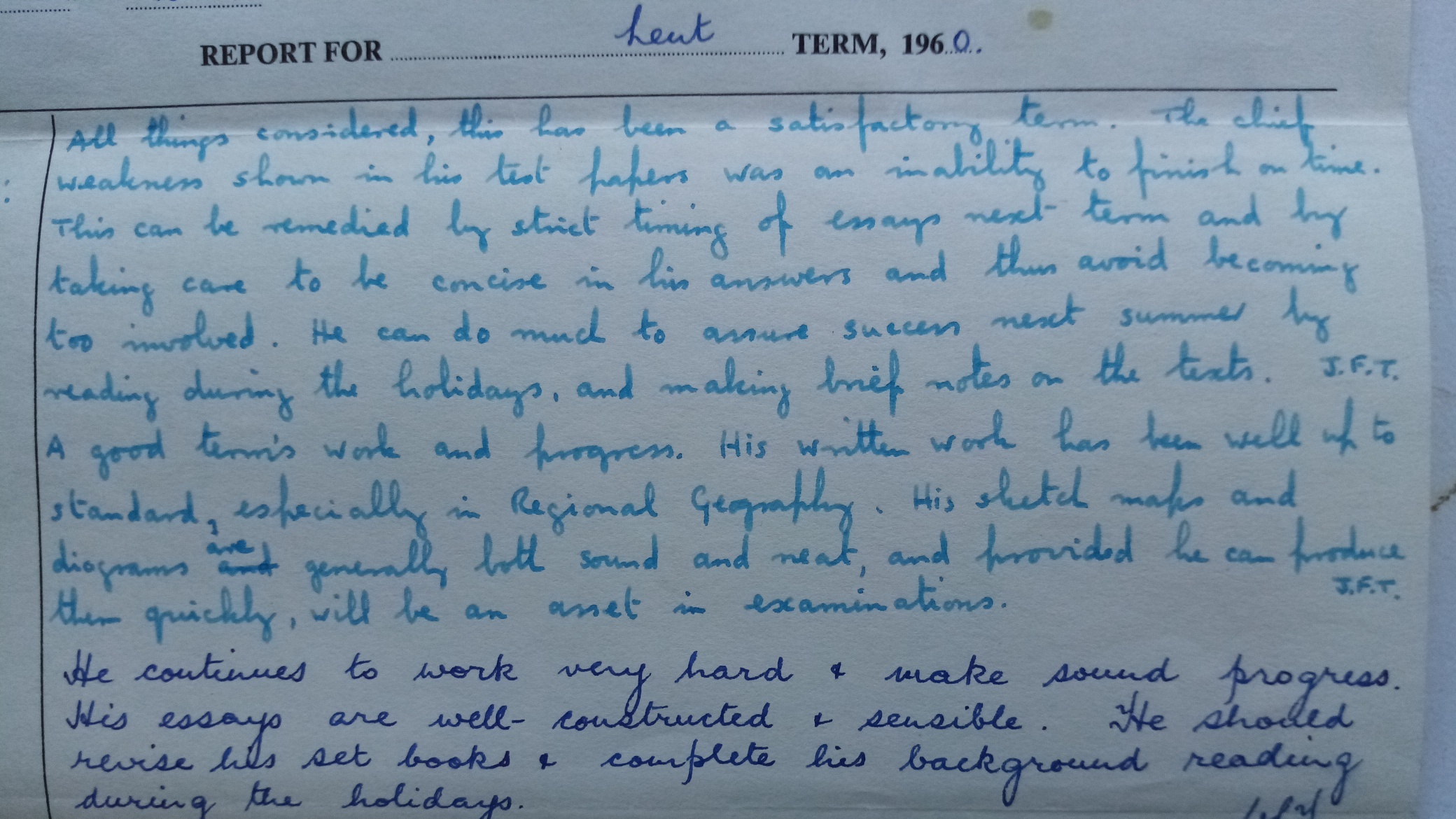 In one of my last school reports JFT expresses concerns about my time management of exams, and I remember being irritated by a comment made in an earlier report in which John commented, "David runs the risk of getting carried away by his own verbosity!" This was compounded when 'Stoker' Lewis, my English tutor, added in the same report, "David will never use one word where three will do!"

These comments dented my pride somewhat, but it was true and I have to admit their words were prophetic as I ran out of time during my A level history exam.

Whilst researching John, I have been told by several boys who were taught by him during the sixties, that he was a popular Master and well thought of both as a teacher and a person, who often remained in touch with boys long after they had left school. Perhaps, in hindsight, I have been a little unkind in my treatment of him in my memories about the fifties, but I must say that the talented schoolmaster was not universally popular with the boys of Schoolhouse, which is where he spent a lot of his time.

Maybe boys of the forties and fifties experienced slightly more frugal and difficult living conditions and were inclined to be more rebellious and less reverential than our counterparts of the 1960s and beyond.

There is a very well-known episode that took place inside The Memorial Hall in 1961 which revealed a rather more compassionate side to John Francis Tilley. I am told on good authority by an Old Oswestrian who was there at the time that three boys received a flogging in front of the whole school and he witnessed John breaking down into tears at the sight of this public humiliation.

The writing was now well and truly on the wall for the turbulent three-year reign of the Frankland administration.

Soon after this, Major Baker left his teaching position and returned to the army and Mr Felton, who had been the second in command at Oswestry since arriving with Headmaster R Williamson in 1920, also went into retirement. 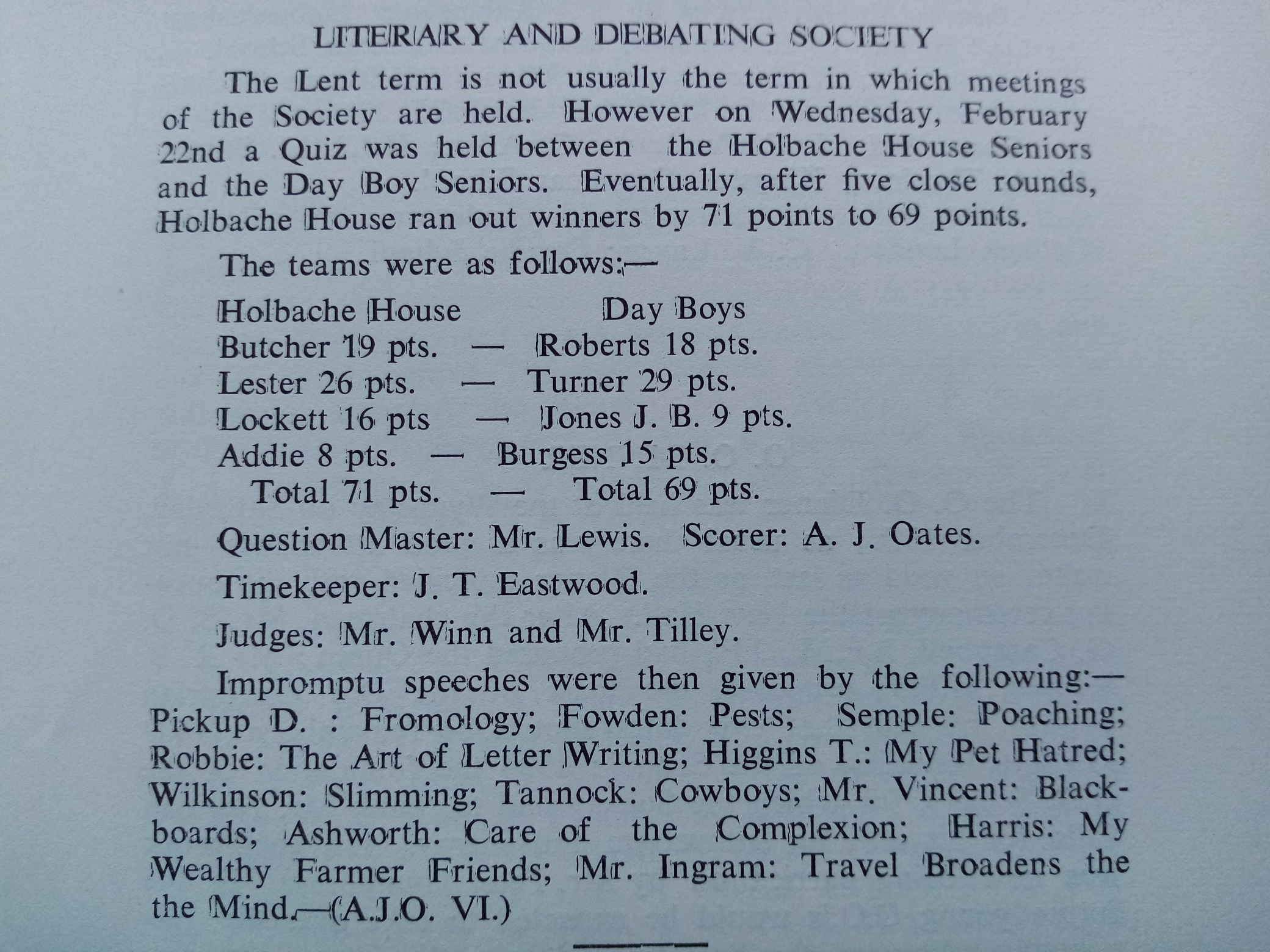 Excerpt from The Oswestrian, April 1956 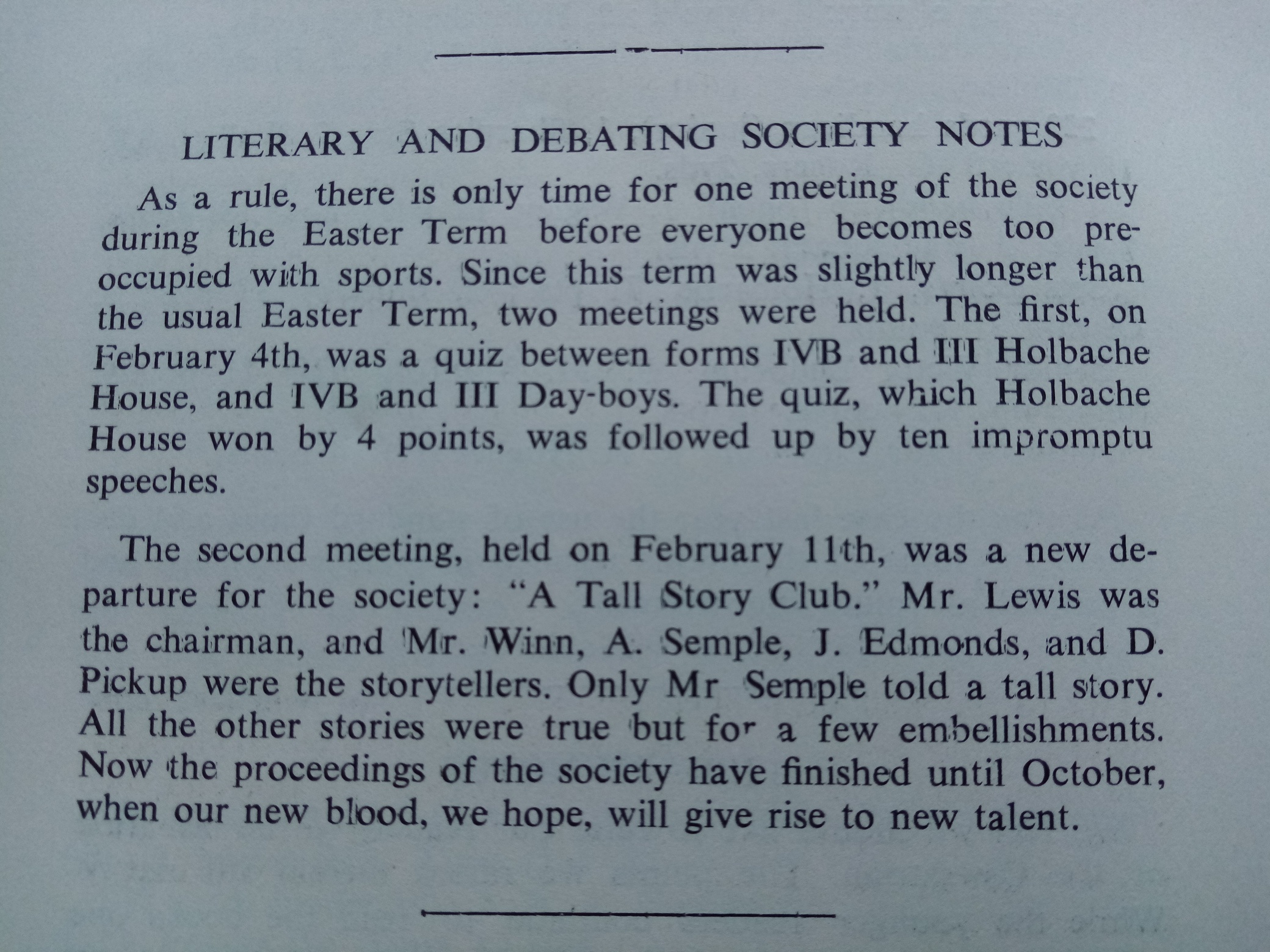 Mr Tilley involved himself in many aspects of school life; he was the chairman of the Literary and Debating Society and, I note from the above items in The Oswestrian, that I gave a talk on Fromology, knowing absolutely nothing about cheese, and I was fittingly a member of The Tall Story Club. Alan Semple, pictured below, gave a very amusing speech on poaching (and I am not talking eggs), a subject very dear to his heart. Alan was a keen participant in the art of poaching as he was to demonstrate so skillfully when I spent one half-term at his family's hotel situated on the main street in Bala, Wales. We spent a good deal of time, mainly eating, in the hotel kitchens where I observed a steady stream of dodgy-looking rustic characters knocking on the back door bringing freshly caught game and salmon which was destined for the hotel menu. But we also did a little poaching ourselves in company with one of the 'Boys' who had greeted Alan like a long-lost friend when bringing a freshly snared pheasant to the kitchen door.

In 1960, prompted by his passionate interest in music and the Choral Society, JFT was instrumental in forming The Music Club which went from strength to strength under his leadership. Taken from the 1960 Lent edition of The Oswestrian

Like Duncan Felton, he had an interest in following the progress of boys once they had left their schooldays behind, and he became more and more involved with the administration of the Old Oswestrian Society as time went on. I remember Bernard and myself being surprised many years after we had left Oswestry by a visit to our office in Haslingden by JFT on his well-travelled bicycle, and it pleased him no end to see the look of astonishment on our faces.

Mr Tilley was the last of the old guard of Williamson, Felton, Lewis, and Tilley (each of whom strode like a colossus through the corridors of education at Oswestry School in the middle of the last century), to pass away after a lifetime dedicated to school and church. I am quite sure he would have wanted to celebrate the 600th anniversary celebrations which took place in 2007, but it was not to be and he died in 2005.

However, that was not quite the final curtain as this complex and devoted schoolmaster bequeathed his not inconsiderable fortune to be shared between Oswestry School and Holy Trinity Church. Loyal to the end, the likes of him and his colleagues may never be replicated. 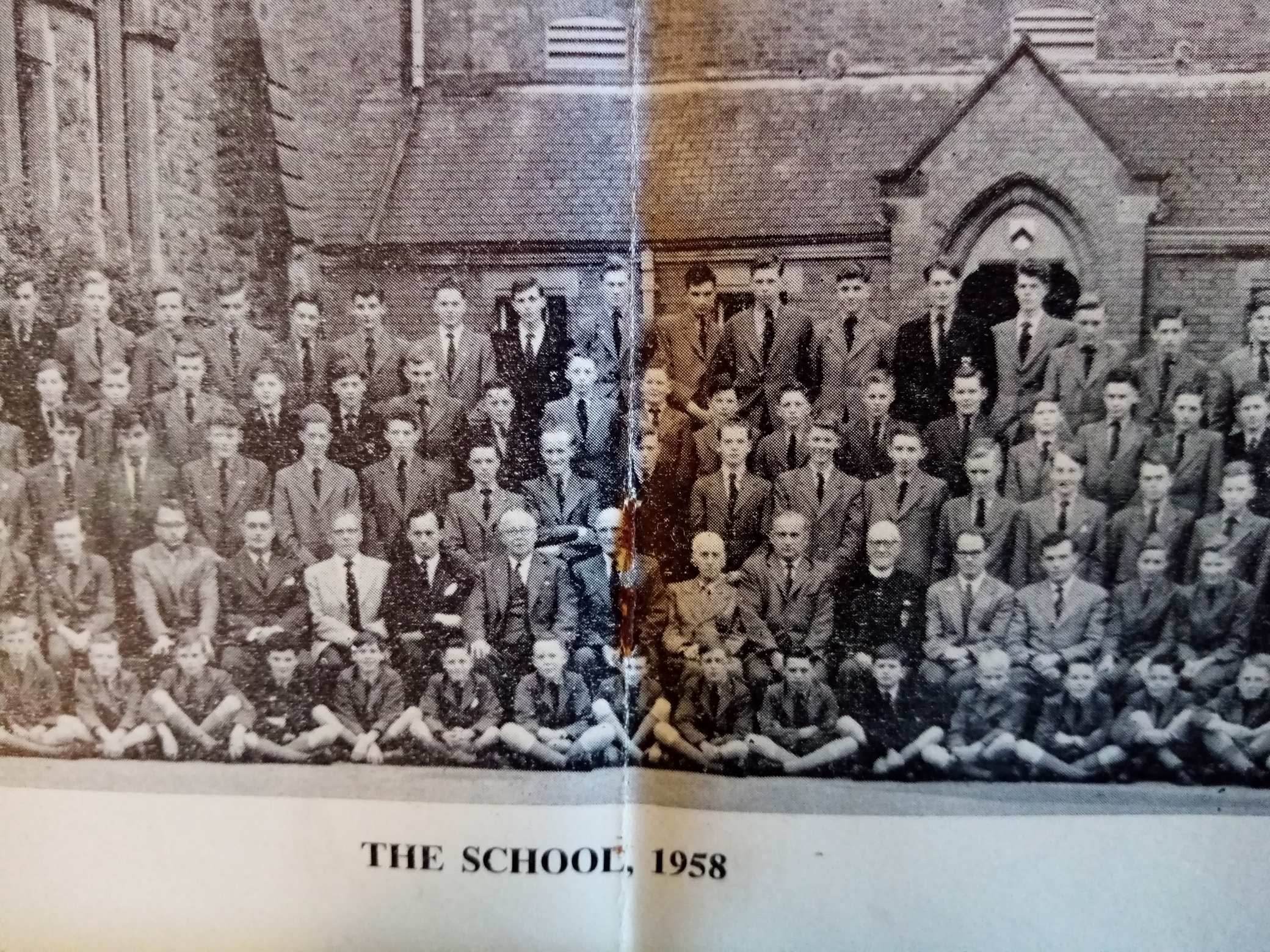 In the photo above Headmaster Williamson is bottom centre. To his right are Felton and Tilley, and to his left are the ancient art Master 'Papa' Webster, and Lewis. I am immediately behind and between Tilley and Felton. What a serious look, and what about the shoulder pads!!

They were hands-on teachers before the arrival of mobile phones and the sophistication of the internet and I consider myself lucky to have been a boarder at Oswestry School at such an interesting and turbulent time in its history. It was never dull.