What a difference a day makes, and Sunday arrived windy and wet providing excellent conditions for true sailing. Feeling a little sorry for myself, I awoke nursing a beautiful black eye, much to the amusement of everybody, and it crossed my mind that I would have a bit of explaining to do on arriving home later that day. 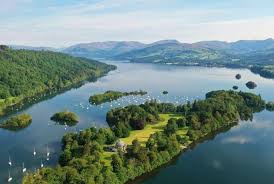 During breakfast the conversation soon turned to how we could take advantage of the inclement conditions and someone suggested a race to one of the small islands dotting the lake. Thinking it would add a little spice to the event I proposed that a School House boat with the inclusion of Bev Croft, the only day boy present, should take on the rest of the OOs who had all boarded at Holbache House.

The challenge was immediately taken up with the proviso from Colin Smith that if School House lost, birthday boy 'Cow' Parslew should be ceremoniously dunked in the waters of Windermere. I glanced over at John who nodded in agreement and he countered quite simply by saying that should we win, Colin would have to bow to the same treatment. Hands were shaken on the arrangement and having loaded up with provisions and beer we left our anchorage off Storrs Hall and for a couple of hours island hopped, practicing the basics of tacking and jibing in preparation for the main event of the day which was a race to the small island in the picture to the left. 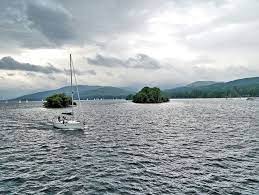 Each boat had crew members with limited experience of sailing and I had spent a little time crewing for a friend who had joined a local sailing club. Although we had begun celebrating John Parslew's birthday the day before, Sunday 14 October was his actual 21st birthday, and as John was a member of the School House crew it wasn't long before a few beers were being cracked on our boat. When I revealed that it would be my own 20th birthday the following Sunday the rest of the flotilla were alerted and it soon became cause for a double celebration with drinks being poured on all the boats! It crossed my mind that things could all go horribly wrong if we were not careful.

Sure enough the revelry began again and very soon the sound of clinking glasses and beer bottles wafted over the water as all the boats came together. Ian Hamer attempted to board our boat and found himself with one foot on each craft as the boats drifted away from one another, and with an ominous ripping noise his trousers split apart just before he fell into the water. Guffaws of laughter rang out as he was thrown a lifeline and pulled out of the freezing water. 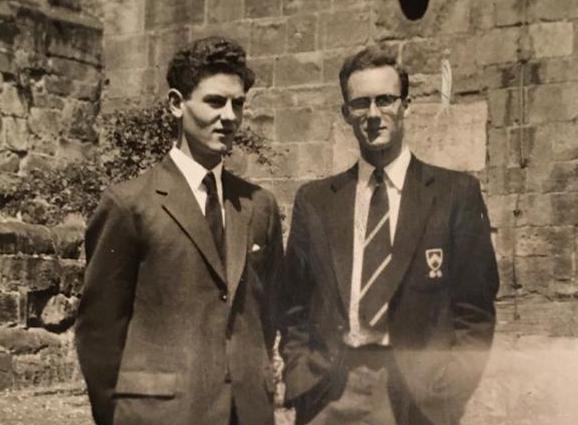 Under the circumstances it was inevitable that someone would fall foul of a boom during manoeuvres and I was not the only one who would take home a shiner of a black eye that day. Poor old Jimmy 'Sharps' Sharples found himself in trouble again when, with a beer in one hand and a telescope in the other, he failed to duck under the boom and was sent sprawling to the deck whilst doing a passable impression of Admiral Lord Horatio Nelson. Just as he came to the point of seeing no ships he saw stars instead as the boom cracked him on the forehead and he went down like a bag of wet cement. Several beers later when he had almost recovered his composure he said in his inimitable way that he had seen more stars than when on holiday in Las Vegas the previous year. 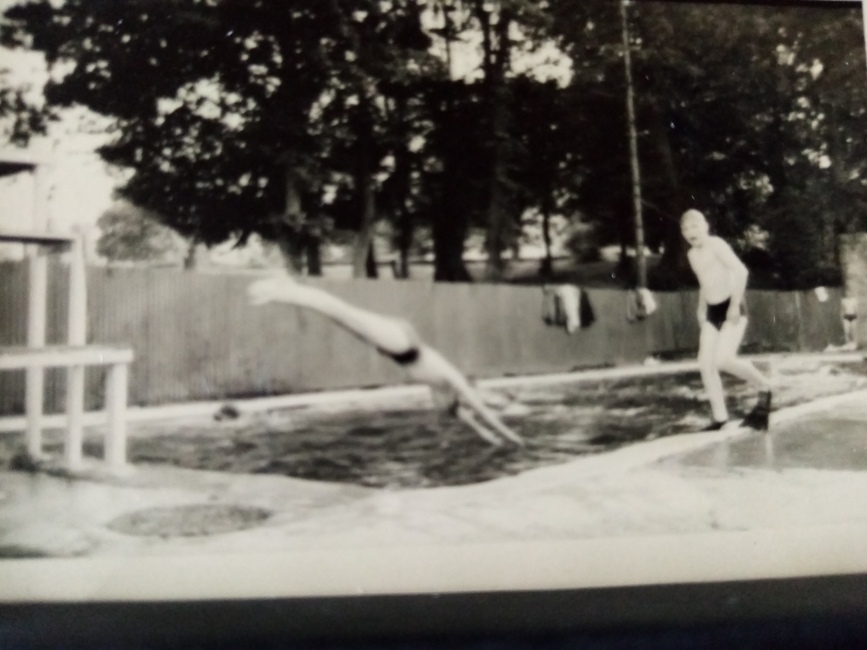 There was yet more tomfoolery to come, and as the day wore on with worsening weather all thoughts of a race against Holbache, the old enemy, thankfully faded away as it could conceivably have ended badly once the competitive spirit took over. The race was called off, but despite the wind and rain the fun continued and when it was my brother Bernard's turn at the tiller he took great delight in sending us round in circles almost causing a collision with Don and Tony Burton's boat. But for the grace of God there could have been more Old Oswestrians in the icy waters of Lake Windermere that day in October than there were at times in the School's open air swimming pool during the hot summer months of the 1950s. Most of us dreaded our first dip in the glacial pool which was fed by water from St Oswald's Well and 'Stoker' Lewis and J F Tilley looked on with almost demented glee as we dithered at the side of the pool trying to summon up the courage to dive into the water. Photo (left) shows my brother Bernard wearing flippers.

But I digress. For some reason there is no mention of the proposed race in my Diary and I can only assume it was because at the end of the day it had been a non-event, but the memory is still as fresh in my mind as though it happened yesterday. We eventually arrived at the bottom end of the lake, mercifully without any further mishaps, and after a brief stop ashore began the return journey to Storrs Hall where we dropped off the Old Boys whose cars had been parked there during the weekend.

Arranging to meet up with Don and the others again in Bowness we sailed up the lake on the final leg of our journey, and having made everything ship-shape handed the boats over to their owners. Assembled together on terra firma in Bowness for the final time we reminisced laughingly about events of the weekend for a while before saying our adieus and heading off on our separate ways vowing to repeat the weekend next year. 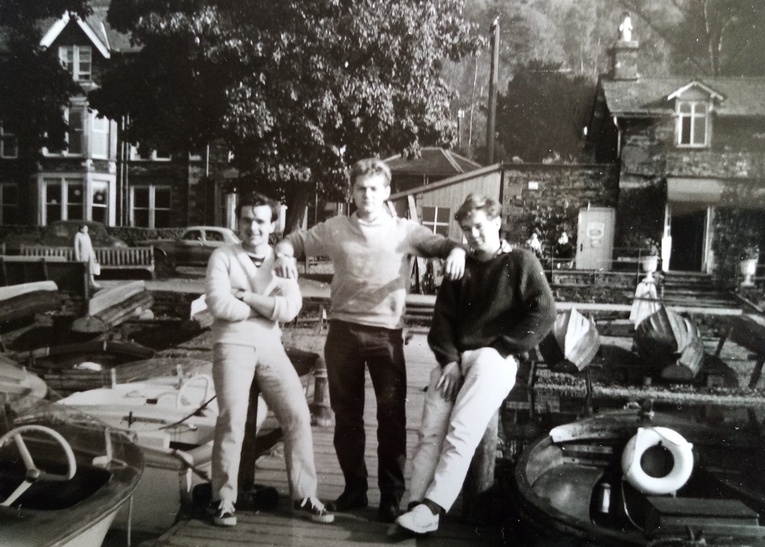 The homeward journey in Don's car with Bernard and Tony gave me ample time to formulate a reply to the inevitable quizzing from the Spanish Inquisition, (my parents), as to how I acquired my black eye and I decided it would be in the best interests of everybody if I told them a little white lie which could be backed up by Jimmy Sharples who lived a couple of miles away from us.

"Don't tell me you have been fighting again?" were the accusatory words that greeted me as we walked through the front door. Feigning innocence I replied calmly, "No mother, I was hit in the face with the boom, and Sharps was too!" Dad just grinned. 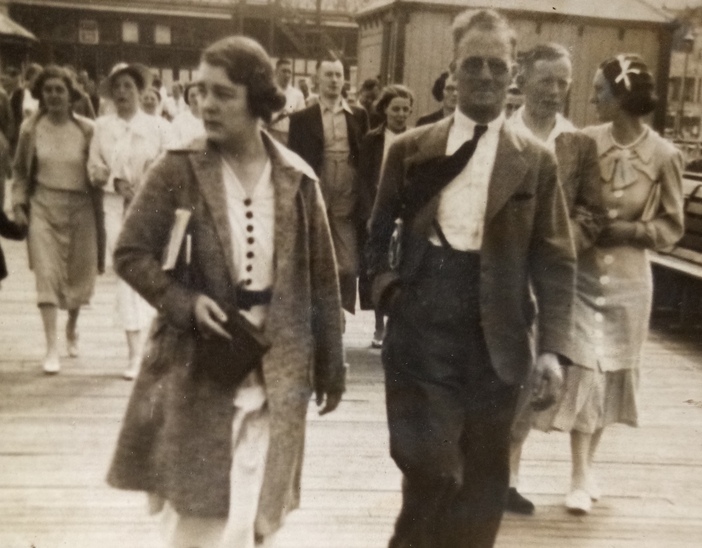 The Spanish inquisition: Mum and Dad in their prime

For the next few days my black eye followed me everywhere and it became the source of considerable amusement for all and sundry, but gradually the colours began to change and it finally faded into history. However, whereas my new nickname stuck with me for only a relatively short time, the memories of a wonderfully wet and windy weekend on Windermere with a lovely bunch of Old Oswestrians are still as fresh as a daisy. The Second World War finally came to an end in 1945 leaving much of Europe and other parts of the globe devastated after six long years of traumatic turmoil. More... In the summer of 1957 Oswestry School's complement of approx 190 pupils were looking forward with anticipation to Speech… More...