The life and times of 'Stoker' Lewis; Legend of Oswestry School (Part 1)

D St B Lewis arrived at Oswestry School in 1946 when teachers were in short supply following World War II, and he became a legend in his own lifetime. Unfortunately, I can shed little light on the life of 'Stoker' Lewis before 1952, but I assume that the nickname was given to him by early boarders because of his previous naval connections. He would also have shared many of the privations experienced by the boys in School House and, from all accounts, living conditions at Oswestry in 1946 just after the war had ended in 1945 were even more spartan than in my time during the mid fifties.

Because of rationing, everything was in short supply; some of the things that we take for granted today were luxuries in those far-off days, and many items that now grace our homes and lives had yet to be invented. I can personally attest that in the fifties hot water was always in short supply, subject to the vagaries of an ancient, ailing heating system, and in winter we were often cold, even indoors. I was constantly complaining to Dai Lewis that the Seniors were getting a raw deal as far as bathtimes were concerned because, come 10.30 at night, very often the hot water had largely been used up during bathtime by the Juniors and Intermediates who occupied the far end of the Senior dormitory.

Diary entry 22 January 1960... taking Stoker to task about the lack of hot water

However, I am told it was even worse a decade earlier when in harsher winters, boys sometimes wore overcoats in class to keep warm and on bath night two boys shared each of the three free-standing antique bathtubs, which were still in use in 1960, to make the most of what hot water was available. Intriguingly, I am unable to confirm whether or not Dai Lewis had to share his late-night bathtub with another staff member, either male or female! 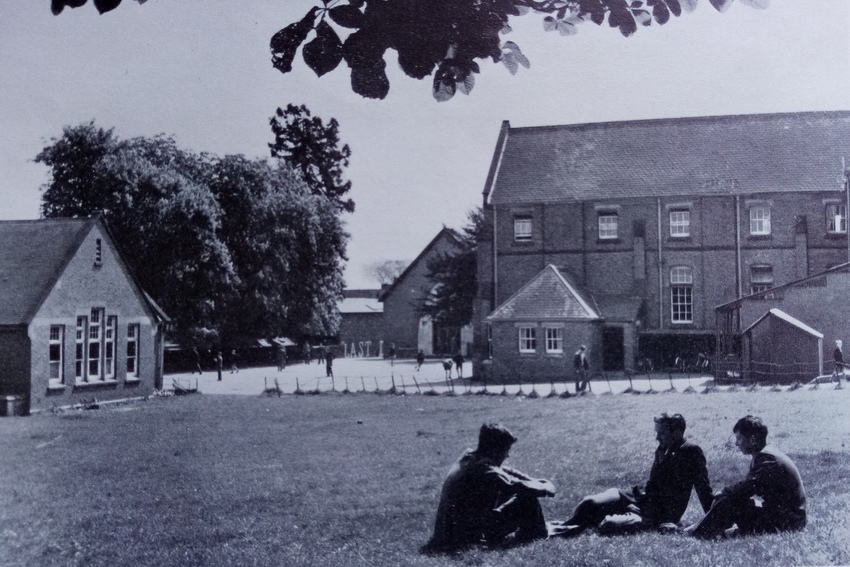 Once he had been designated as Housemaster by Mr Williamson, Stoker ran his domain from the Masters' common room, the annex, and a small bedroom at the top of a flight of stone stairs which led down from the first floor to the door at the end of the long corridor. His room was situated conveniently between the Junior and Senior dorms, and from this vantage point, he was within hearing distance of any activities taking place, or not, in either of the two dormitories. Sometimes he would take us by surprise with a sudden appearance at the door, usually as we were all still lying in bed waiting for the second bell of the day to ring at 7.55am - five minutes before breakfast.

The Welshman's stentorian voice would shake us into a flurry of activity, launching us into a desperate race to beat the eight o'clock bell; any boy late for breakfast faced a humiliating wait for permission from the Headmaster to sit down at his table, and as a persistent offender I was eventually summoned to Mr Williamson's study where this mild-mannered man told me very quietly and calmly that I would face repercussions if my timekeeping did not improve. I did not need to be reminded twice! 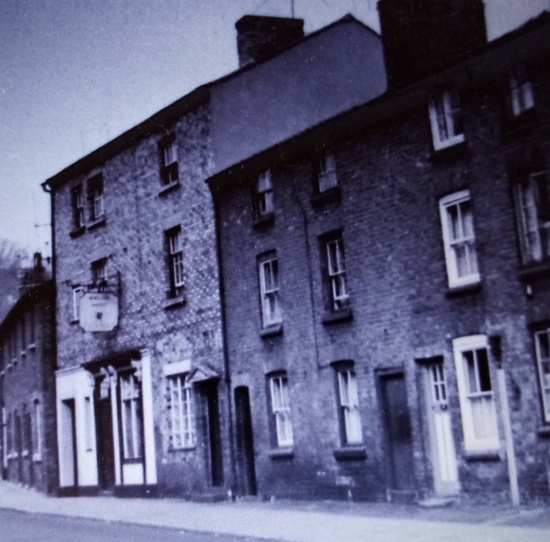 Dai Lewis was often late for breakfast himself on a Saturday morning after a convivial evening at his favorite watering hole. The fearsome Welshman was known to be partial to the amber nectar and, appropriately, his Friday night bolt hole was The Welsh Harp pub which was conveniently situated just yards from the school gates and opposite the hospital. 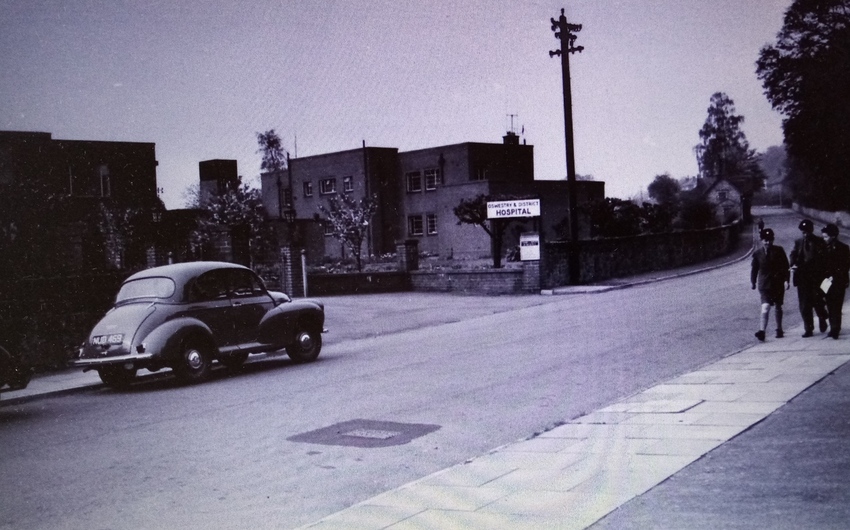 Boys on their way out of the school gates

By the time my brother and I arrived as boarders in 1952, Mr Lewis had established a firm grip on his role as Housemaster at School House and he was respected and feared in equal measure by everybody. We Juniors were very wary and intimidated by the stern disciplinarian, particularly in the classroom, and none of the other Masters, not even Duncan Felton whose bark was worse than his bite, could command our attention as Stoker did. 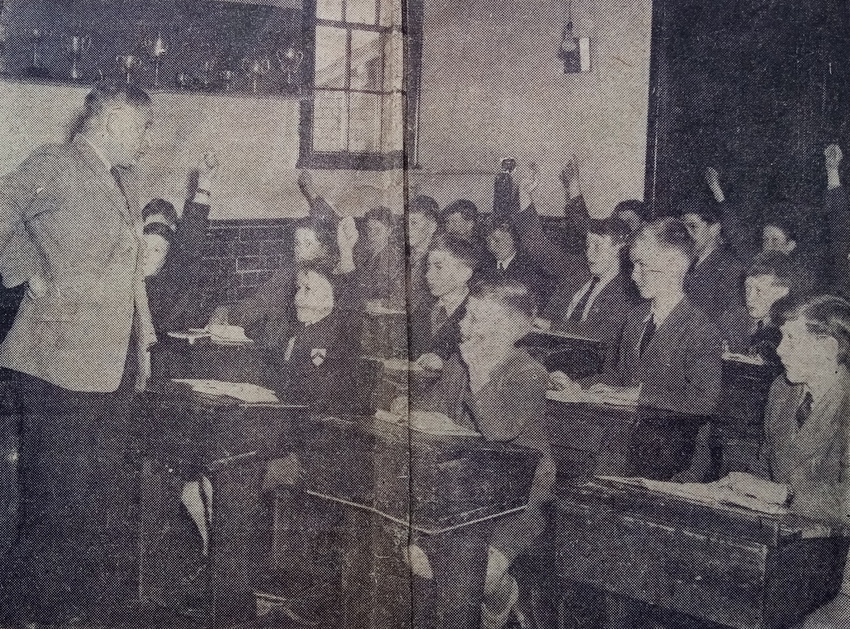 It must have been a fine line to tread between asserting his authority and maintaining the friendly respect of a group of potentially rebellious boys; remembering the behavior of my classmates, I knew just how quickly anarchy could break out when faced with a Master, or even a prefect, who was unable to control the classroom. On more than one occasion I was obliged to intervene during evening prep to help out a house prefect who was being terrorised by the boys under his charge and, as you can see from my Diary entry of the time, it was not uncommon in those days for senior prefects to administer corporal punishment. I was shocked when I read this many years later, but behaviour towards boys is much more civilized today, thank goodness, and if you read the splendid article that Corinne McKenna posted recently on Oswestry Connect, what was regarded as the norm during the fifties was tame in comparison with what schoolboys of the 15th Century faced!

Very often my brother Bernard and I would spend half term at school and it was then that we saw a completely different David Lewis, who would change from a Dickensian type Schoolmaster into an avuncular uncle at the stroke of a pen.

No longer the fiery, scowling Wesh dragon we saw during term time, he behaved like a family friend to the small group of us who had opted to remain at School House, even to the extent of taking us to professional football matches and the Regal Cinema. 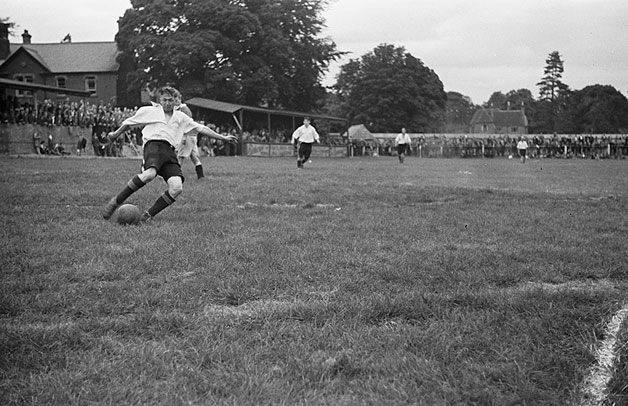 Unlike JF Tilley, who was a confirmed bachelor and never married, Mr Lewis remained single until late in his life when he was finally tamed by Maureen Morrison, the School Matron. School House had become his home and the boys were his family, and as such he considered himself to be in loco parentis. By managing this difficult balancing act to great effects, like his colleague Duncan Felton he acquired the respect of all who knew him and throughout his teaching career he was a vital cog in the Headmaster's well-oiled machine. 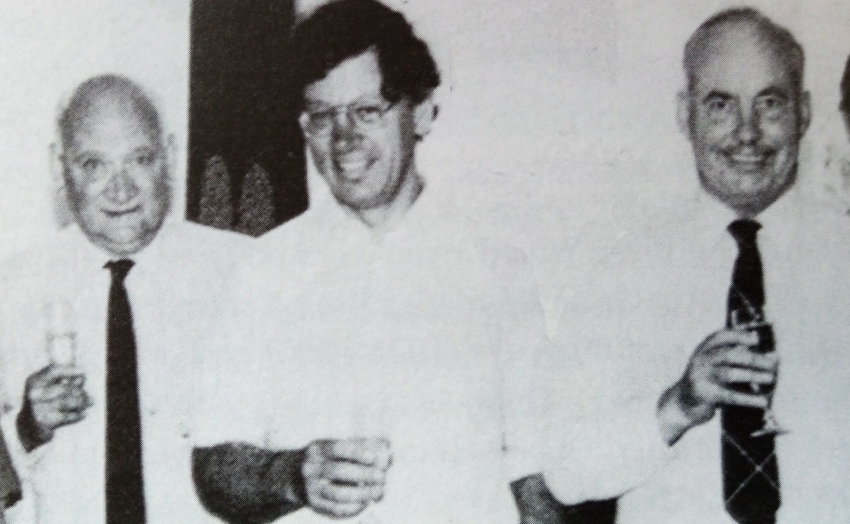 In the concluding part I will touch on some personal issues and delve more into the personality of this passionate Welshman.