David Pickup recalls the many occasions he and his brother, Bernard, watched or took part in Old Oswestrian matches during Speech weekends in the early 1960s. It seems timely to pen a few memories from those weekends as this much loved annual fixture has just been played out with a win for the Old Oswestrians. 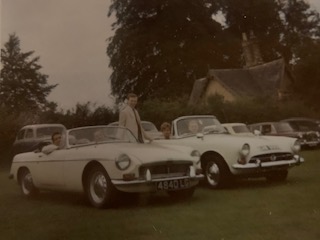 First and foremost it was always a fun weekend, and each year a group of my contemporaries would gather together, usually at the home of George Roberts-Jones, one of my oldest friends who lives in Oswestry, to party the night away after the speeches had been made, and once the more serious matter of the cricket match had been resolved.

In 1961 my brother and I returned as Old Oswestrians to play in an OO match for the first time, having left Oswestry in 1960, and we were reunited with many familiar faces on both teams. In its new format the match contained four innings, and similar to the previous year when my School team had beaten the OOs, we Oswestrians were put to the sword by the school XI in the first innings and eventually lost the match. Looking at the match statistics I see that by a strange quirk Bernard and myself were both run out for 5, and I did not bat in the second innings as we declared, leaving the school just half an hour to score 60 runs. The game started at 12 noon and finished at 6pm and I noted in my diary that I jokingly remonstrated with 'Pip' Narroway at halftime, during tea, for not putting me on to bowl instead of using five old cronies who dated back to his time as School Captain. 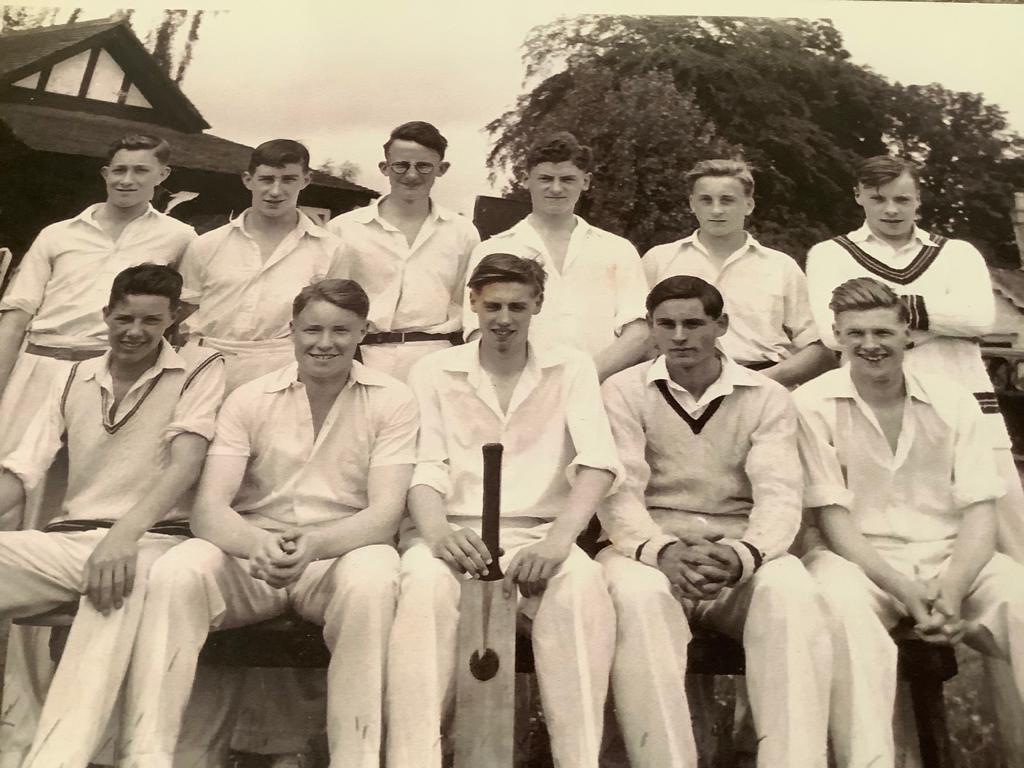 School Team (1956) prior to the start of the OO match - P Narroway (Capt) seated, centre

As stumps were drawn my disappointment was palpable as we had lost the match, and feeling like I had somehow been left out of the action I muttered pointedly to the captain that perhaps next time he should consider giving me the ball! Pip just grinned.

To his credit, in a close run game, Narroway scored 59 and my brother played his part by scoring 37, holding a couple of important catches, and taking a valuable wicket. My contribution was negligible. 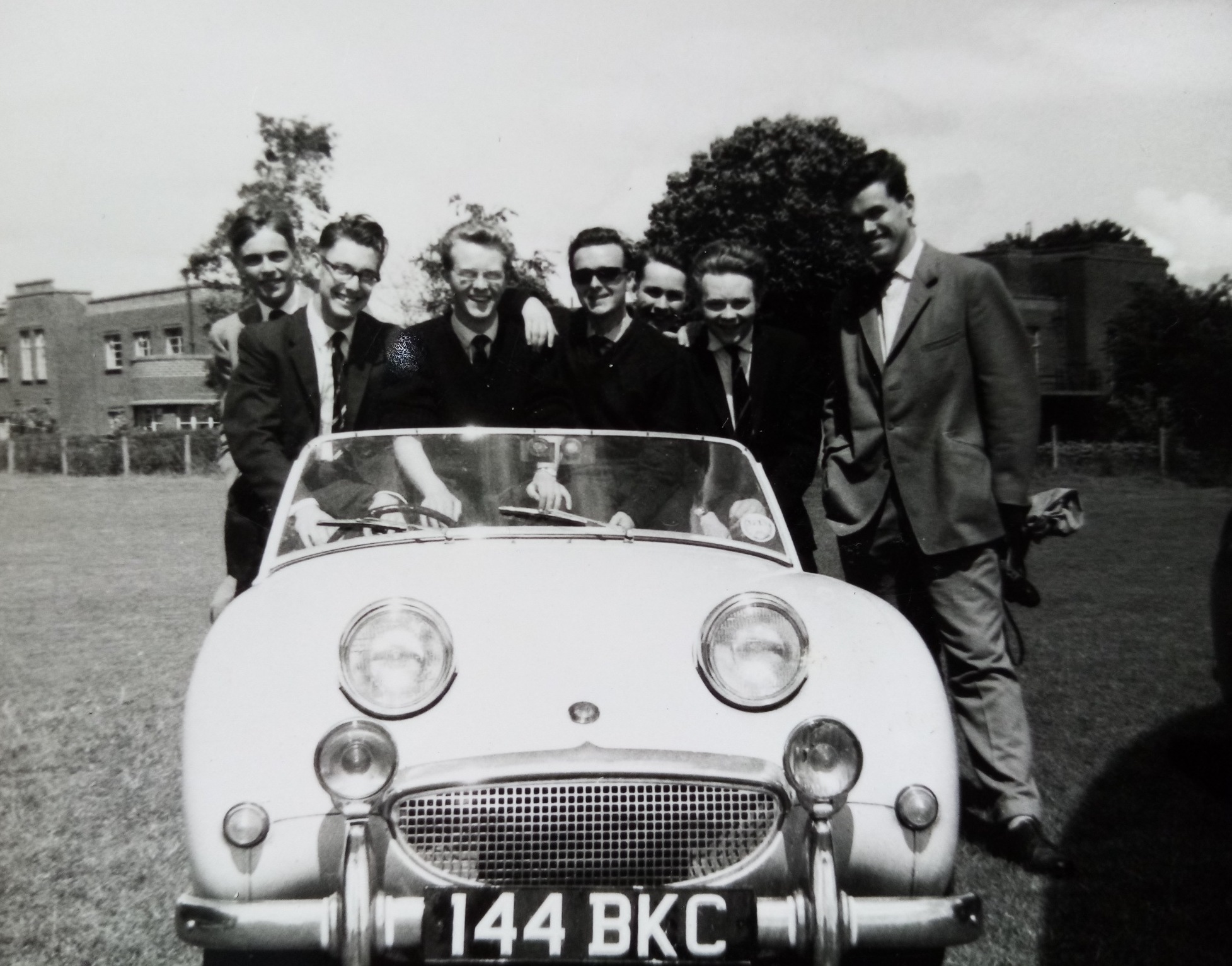 In those early days, parents and Old Oswestrians used to drive their cars onto the Maes-y-Llan and park up just behind the whole school who would be sitting on the grass, close to the cricket square, to watch and cheer on the 1st XI. The cover photo shows School team members Jack Greves and Edward Goff leaving the field of battle in the OO match of 1960. The following year Edward lost an eye in a school laboratory experiment that went badly wrong, and for a while, it was touch and go as surgeons fought to save his eyesight.

During the early and mid-sixties, many of us developed an interest in speed and fast cars, often rolling up at school to show off our latest acquisitions and act the boy racer. In the photo to the left we were trying to see how many Old Oswestrians could fit into George Roberts-Jones' Austin Healey (Frogeye) Sprite prior to the start of an OO match. 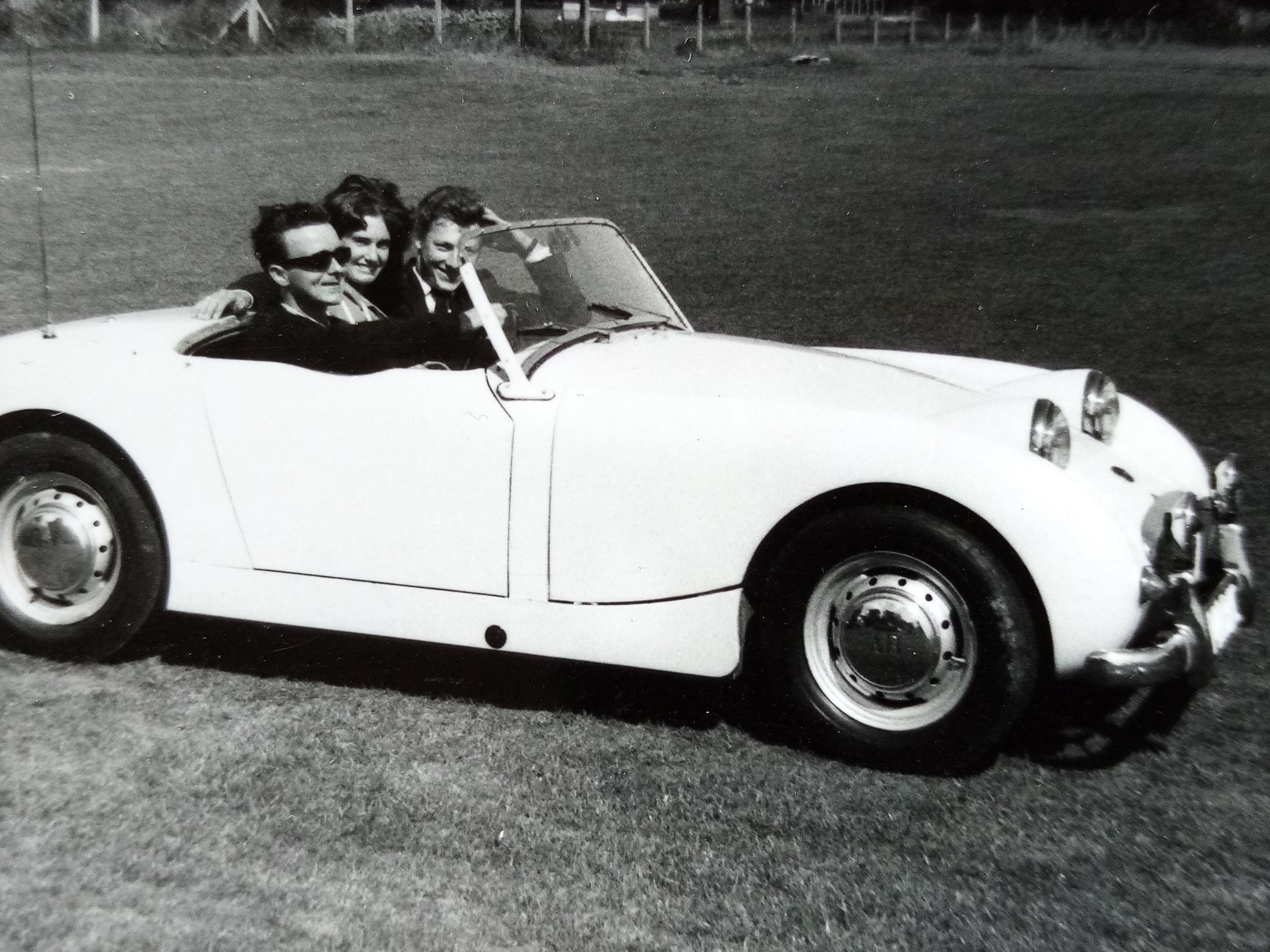 Behind the wheel of George's Sprite

After the game, we would often seek out 'Stoker' Lewis to catch up with all the latest gossip and enjoy a couple of beers with the old sea-dog who seemed to have suddenly morphed from an irascible schoolmaster into an amiable father-like figure. However, unlike many OOs, I found it difficult to call him David after 8 years of knowing him as Mr Lewis and he laughingly teased me when I addressed him as Sir. Following a very enjoyable chat with 'Dai' Lewis, some of us can be seen posing for a photo shoot, perched on the fence which ran alongside the lower paddock. 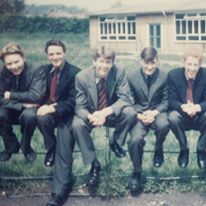 To the left is a photo of the same boys taken in 1960. Sadly, Jimmy Sharples and Jack Greves died, separately, in tragic accidents not many years after this picture was taken, and I have lost contact with Jeremy. Roger, 'the daredevil' Morgan, who recently made a three-mile high parachute jump, is pictured below during his latest adventure in the skies, doing his impersonation of Biggles, the main character in the WE Johns books of the same name that were so popular in the school library of the fifties. I am sure it will not be long before we see more action from this incorrigible thrillseeker. 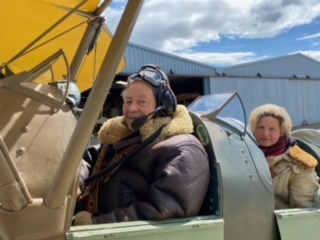 In 1962, the following year, Bernard and I decided not to play in the OO match, but we arrived on Friday 20 July to join in the weekend fun before setting off with several OOs for a week at Butlins Holiday Camp, Pwllheli.

As was customary, our first port of call was George's before proceeding over to the Maes-y-Llan for the speeches which were to be held in a large marquee. On Saturday afternoon we watched part of the OO match and saw our friend Don Berry, who is central in the photograph below, reach a total of 31 before getting himself run out. It was quite an exciting end to the game which was finished off for the school by M Harvey who hit a magnificent six on the second to last ball of the match. OOs in party mode at the dance

It was a pleasant surprise to see our old Headmaster's wife, Mrs Williamson, and her daughter Anne at the evening dance. She had been very supportive of me as a rookie captain of the cricket team and, as the smoke curled up into her eyes from the obligatory cigarette dangling from the corner of her mouth, she demanded to know why I had not been playing in the match. I explained that neither Bernard nor myself were fond of the new format and had decided not to take part that year.

We had intended to set off for Pwllheli immediately after the dance, but on arriving at George's to collect our luggage a party was in full swing so, of course, we stayed until the end and George's father refused to let us leave the house until we had managed a few hours' sleep.

By six o'clock in the morning we were ready for an early start, and so began a thrilling, high-speed journey down to Butlin's holiday camp followed by an equally high-octane week of fun and games. Returning to George's we gave a lift to two girls we had met at Butlins, who just happened to live in Oswestry, and our 1962 visit to School for Speech Weekend ended as it had begun, just one weekend earlier, with another party and a trip to the seaside before making our way home to Lancashire and a few badly needed early nights. Princess Elizabeth was on holiday in Kenya when her father, King George VI, died suddenly in his sleep in1952. She was crowned Queen Elizabeth II on 2 June 1953 at the tender age o… More... For the first time the festivities would begin with drinks being served at the site of the original school building whic… More... Adam Evans has walked down the aisle!