As Saturday morning dawned, little could we have anticipated that a day spent on the calm waters of Windermere would end in a rowdy ruckus with Teddy Boys at a cheap dance hall in Bowness. 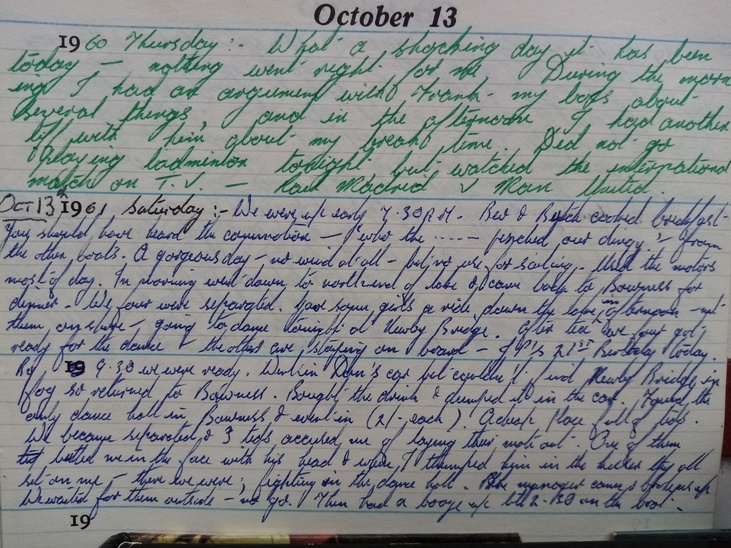 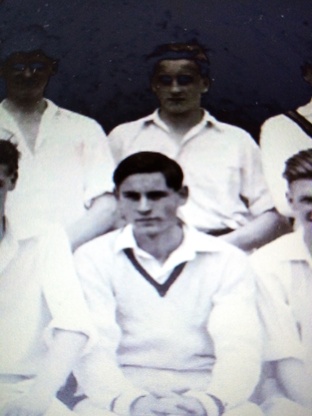 I have never been an early riser and was most surprised to see from my Diary that we were up by 7.30 am. I heard several new expletives that day wafting towards us through the still morning air when OOs with very sore heads on the other boats discovered their dinghies were missing. Reprisals were threatened and amongst much banter we had a great cooked breakfast prepared for us by 'Butch' Butcher and Bev Croft, who had journeyed from Oswestry, before digging out a map of Windermere to discuss our plan for the day's sailing. Apart from his culinary skills Bev was a talented cricketer and he made the trip north from Oswestry several times to play for our Northern OO team (pictured left).

Saturday was a glorious day, but the absence of any wind necessitated the use of our engines and the true sailing experience would have to wait until Sunday. Poring over the maps, we decided that Ambleside, at the northern end of the lake, would be our first port of call and the flotilla set sail in high spirits.

The water was very calm and, basking in the warm morning sunshine, we chugged along shouting excitedly from boat to boat. At some point we stopped to have a swim diving from the boats into the icy water, and Jimmy Sharples, the amiable buffoon of the group, refused to join in. Inevitably somebody was going to end up in the drink and there were calls for Jimmy to walk the plank. A makeshift plank was set up and cries of "Walk the plank, walk the plank" rang out over the water. Steadfastly refusing to comply with the request the hapless Jimmy was unceremoniously thrown fully clothed into the lake. We fished him out to roars of laughter and he was none the worse for an untimely dunking in the lake. 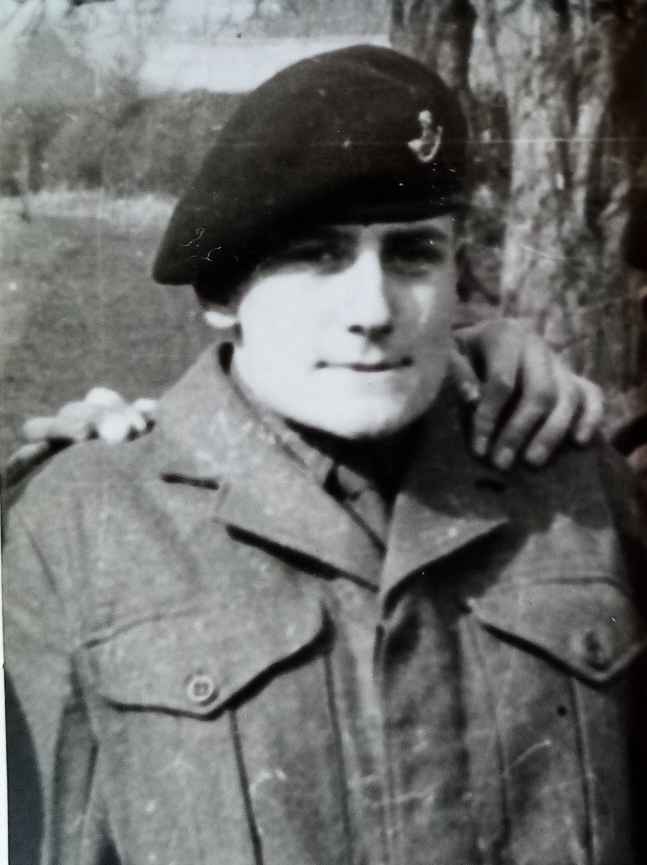 Jimmy in his cadet uniform

Moving on we eventually reached the end of the lake mooring up at Ambleside for a short look around the town before rejoining the boats and heading back down the water, stopping at Bowness for lunch. 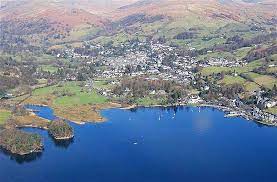 Having stepped ashore we four became separated from the others, and striking up a conversation with a group of local girls, we invited them to come sailing with us for the afternoon and took them for a ride down to the southern end of Windermere. 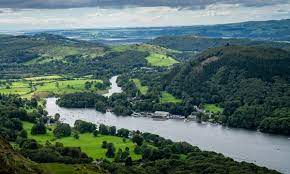 The south of the lake, Newby Bridge

The girls told us they were going to a dance in Newby Bridge later that night and invited us to join them;  an offer we could not refuse! It was early evening before we arrived back at our anchorage off Storrs Hall for a reunion with the rest of the sailing party and, of course, over a few drinks we swapped stories about events of the day. The four of us very quickly became the butt of jokes when we explained that we had clicked with local girls from Bowness and the comments became more ribald once we explained that we had arranged to meet them later. 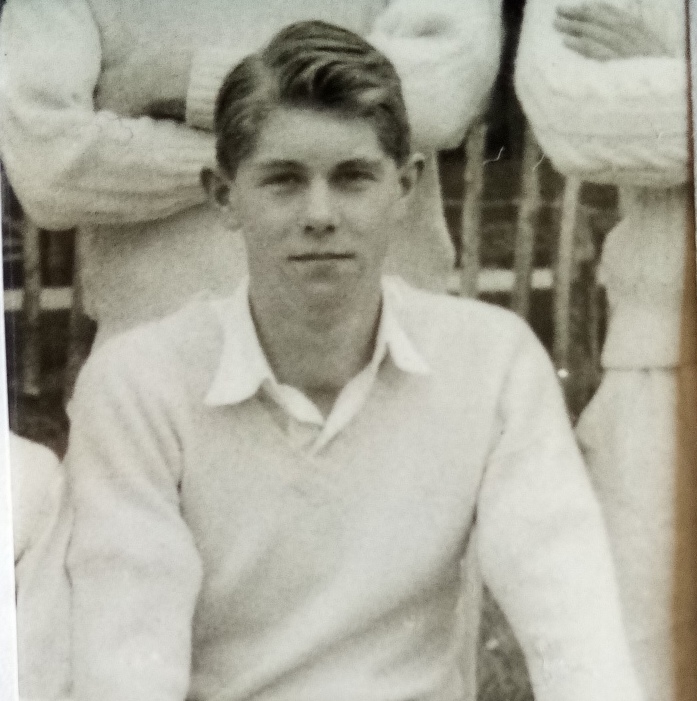 The weekend coincided with 'Cow' Parslew's  21st birthday (pictured left) and we had planned a bit of a party for him which began in earnest just as Bernard, Don, myself, and Tony Burton were getting ready to meet the girls at the dance hall in Newby Bridge. We downed several beers with John and, promising to join him later, we set off on our night out in Don's car.

Unable to find Newby Bridge in a pea-souper of a fog we were forced to turn around and eventually arrived very disconsolately in Bowness, minus our dates, having stopped off for more supplies of beer to take back with us to the boat party. Happening on the only dance hall in Bowness we decided to take a look and after paying the princely entry fee of 2/- (two shillings) we stepped inside the door to find this cheap place full of loutish Teddy Boys and their girl friends. 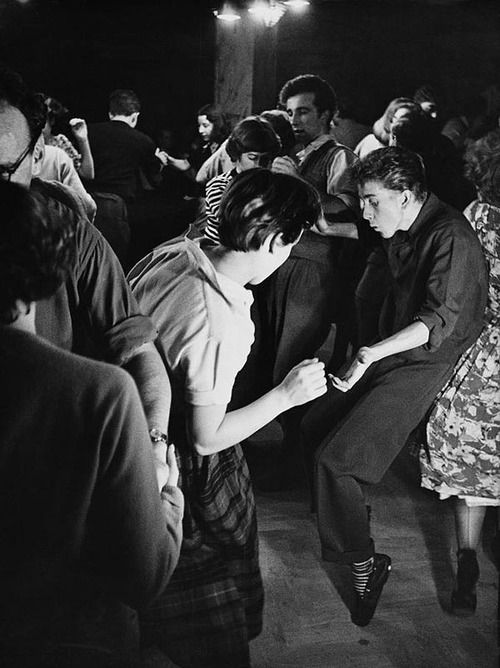 The hall was jam packed and eventually I became separated from the others and three 'Teds', spoiling for a fight and worse for drink, singled me out and accused me of knocking one of their mates to the floor in the toilet. This was not true, although I admit to having had a mild altercation with somebody in there just a short time before about a girl with whom I had been dancing; I think she must have been his girlfriend and he did not like it.

This confrontation suddenly took a nasty turn when I was head-butted in the face. On retaliating by punching the guy in the mouth I was set upon by all three and we soon ended up on the floor of the hall whilst everybody carried on dancing around us as though this was perfectly normal on a Saturday night.
For what seemed an eternity we scuffled on the floor and my top was torn off as I struggled to get away. Where on earth are Bernard and the others? were the thoughts that ran through my mind. Eventually, somebody sent for the manager who broke us up and, adding insult to injury, proceeded to throw me out calling me a trouble maker. The others joined me outside and wanted to know what had happened. By this time it was nearing the end of the dance and we decided to wait for them to come out as the odds were now in our favour, but they never appeared and we trudged off back to the car and made our way home to Storrs Hall.

As we walked down towards the boats we could hear lusty renditions of Cliff Richard hits being sung to the accompaniment of Col Smith on guitar. John shared the same birthday as the pop singer and we were all fans of the British version of Elvis Presley at the time.

Roars of approval greeted us as we arrived with fresh supplies of alcohol (as supplies had become severely depleted) and the party went on unabated until late in the night. "The Infamous Four", as we became known, had certainly enjoyed an interesting, not to mention eventful, day and Sunday would see our sailing skills, or more likely the lack of them, put to the test.

To be continued. In the final part of the story I wake up nursing a sore head, sporting a beautiful black eye, but ready for more action.