At the age of 28, Nigel Birch left the UK for a break in Portugal and as events unfolded during that year it became clear that his future would be tied up with the sunny climes of The Algarve. He, and his wife-to-be Lesley, were destined never to return to these shores apart from occasional visits to family and friends. Now in the autumn of his years, Nigel is still working and planning his next enterprise, having recently sold his winery, Adega do Cantor (Winery of the Singer), which was a joint venture with his neighbour, pop legend Sir Cliff Richard.

Nigel arrived at Oswestry in 1954 and joined me and my mischievous classmates in Form Three. I remember him as a tall, smart-looking boy with a shock of fair hair and a ready smile, who was quite reserved during lessons. We were never particularly close in those days mainly because he boarded at Holbache House which was an outpost of the School in the centre of town, and outside of the classroom we saw very little of one another. 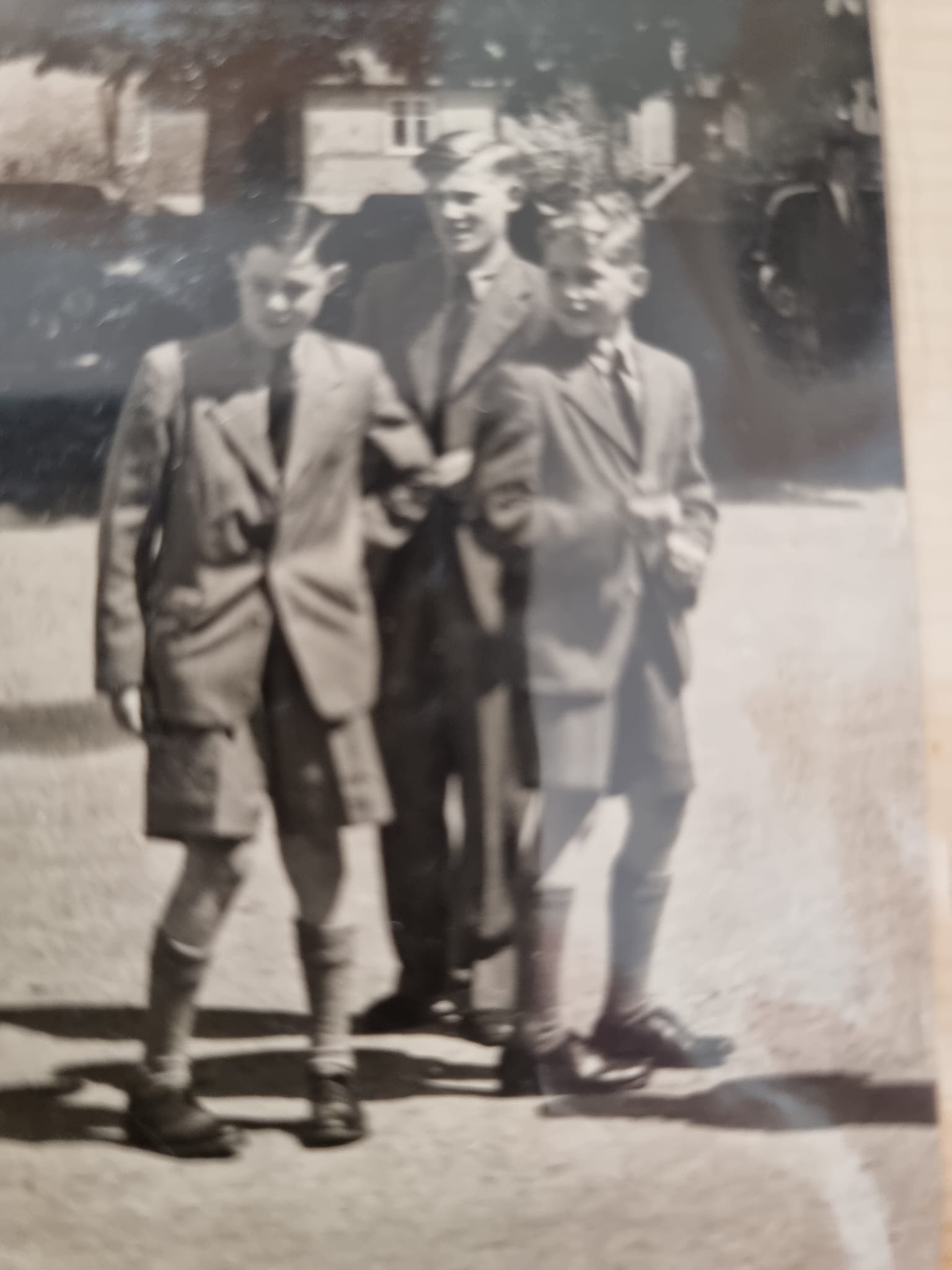 Similarly our paths rarely crossed on the sports field as, in contrast to myself, Nigel at that time was not particularly interested in ball sports or athletics and a strange corollary to that is that four of Nigel's grandchildren are talented footballers in the Academies of Manchester United, Man City, and Blackburn Rovers. Notwithstanding, Nigel was a good high jumper and an excellent hurdler and in his final year he had the misfortune to come up against Tony Hughes who pipped him at the post in the finals of the 110 yds hurdles.

Nigel was a keen swimmer, even to the extent of braving the School's icy cold open-air pool, and having joined the life saving class he won the Award of Merit shortly before leaving school in 1958. As a popular member of the newly formed Chess Club, in the same year Nigel helped the School to an overwhelming victory in a cerebral match against local arch enemy, The Boys' High School, thereby claiming all taunting rights over 'the cabbages' as they sauntered to and from School (the nickname 'cabbages' stemmed from the colour of their green school caps). Interestingly the article below, taken from The Oswestrian, July 1956, mentions the first postal chess matches between Oswestry and a school in Kharkov, USSR - now Kharkiv, Ukraine. The wishes expressed in the last sentence of the report were a forlorn hope, as in November of 1956 that very same year the Russians invaded Hungary and the rest, as they say, is history. How poignant those very words read today in light of ongoing tragic events in Ukraine.

In 1957, the 550th anniversary of the School, Nigel received a class prize from HRH the Duchess of Kent which was followed in his final year by a book written by the famous American writer Edgar Allan Poe. I also received the same book and we joked that perhaps The Old Man, ever mindful of the paucity of school funds, had bought a job lot; either that or they had fallen off the back of a lorry! At the end of Summer Term 1958, as we said our farewells, Nigel told me he could not wait to walk past LAST DAY for the final time and leave his Alma Mater behind for the wider world. I concluded that he had not particularly enjoyed his time at Oswestry, and this was confirmed in a recent conversation with Nigel. 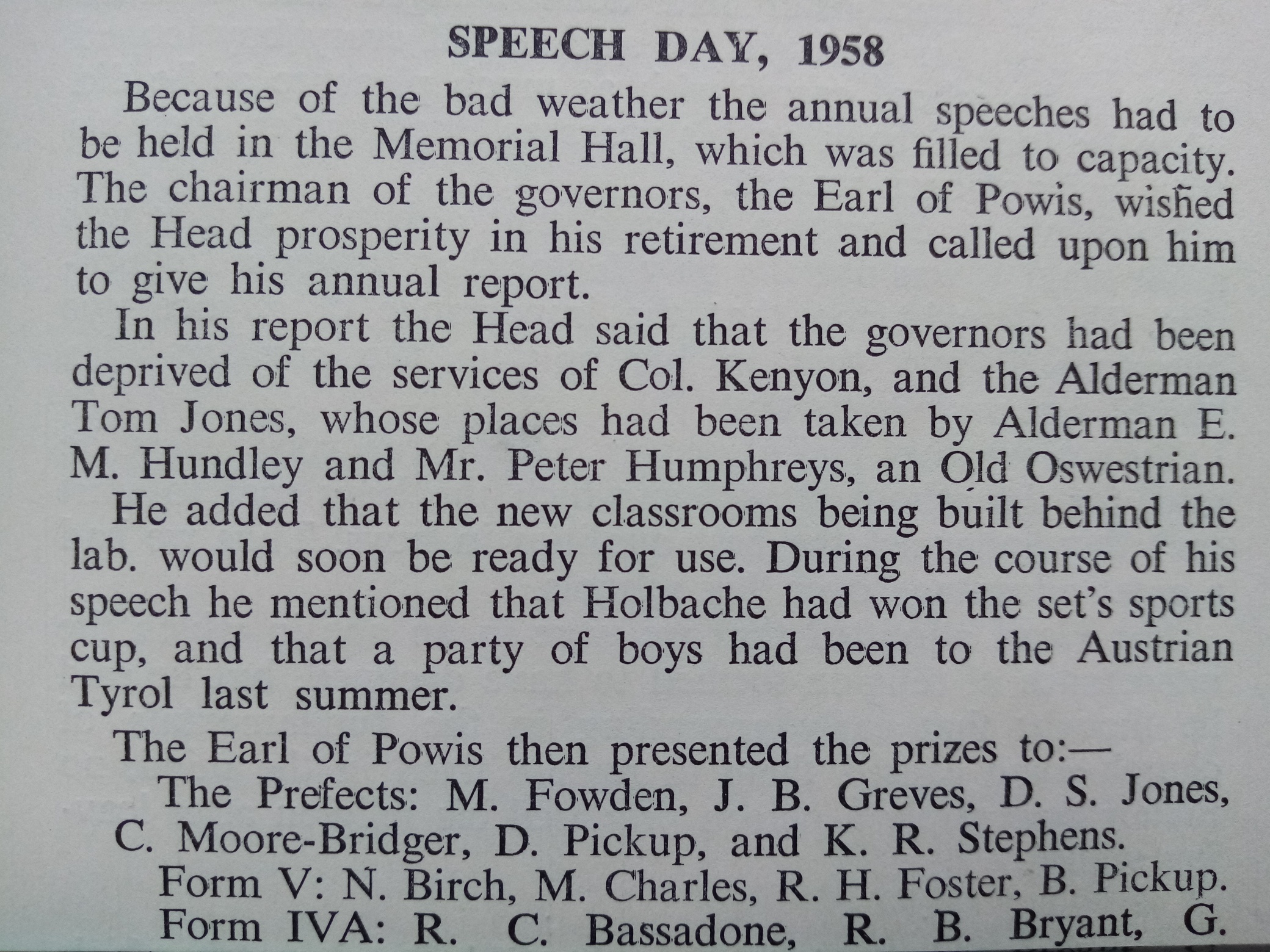 It was to be the last I would see or hear of Nigel Birch for sixty years until 2018, when quite by chance I spotted an open message from him on the school website inviting any contemporaries to get in touch. I duly responded and over the ensuing years his story has gradually unfolded and we have become firm friends.

Nigel's story is not one of rags to riches as he was born into a fairly well to do family living in Cheshire, but it is the story of an entrepreneurial spirit that would take Nigel, his younger brother Athol, and their respective future spouses to the sunny shores of the Algarve where they were destined to make their mark in Albufeira. Mr Birch senior held an important managerial post in the hierarchy of Express Dairies and he was instrumental in getting both Nigel and his brother Athol onto the company trainee management scheme in the South of England. However, over a period of ten years, Nigel became disenchanted with Express Dairies and in 1969/70 he and his then girlfriend decided it was time for a change and left their jobs for a holiday in a family property in southern Portugal. Shortly afterward they were joined by brother Athol and his girlfriend, Peta, who just happened to be Lesley's sister. In the summer of 1970 they pooled their resources and renovated a dilapidated, run-down beach bar which they named La Cigale. The property was sited quite precariously in a beautiful location atop a rocky outcrop protruding from a sandy beach and as the tide came in customers were presented with a spectacular view over the ocean.

Living on a shoestring, and having a great deal of fun in the process, the quartet strove 24/7 to get the bar/restaurant up and running and sheer hard work and a determination to succeed soon bore fruit. A simple strategy of providing basic food at a very reasonable price in a friendly, candle-lit environment proved to be a successful formula, and La Cigale quickly became a very popular venue. Ex-pats living in Albufeira, and local Portuguese from all walks of life came from far and wide to visit what was rapidly gaining a reputation for being THE place for a fun night out in this part of the Algarve. In no time at all the popular Brits were having to turn people away such was the demand for their food and congenial hospitality.

La Cigale became a fashionable nightspot for everybody, including the rich and famous living in this Portuguese enclave, and as its reputation spread by word of mouth the waiting list for a table grew longer and longer. I will not attempt to list the clientele that came to sample the warm and friendly atmosphere of La Cigale, suffice to say its numbers included a wide range of pop stars, show business personalities, media people, and members of the aristocracy. On one occasion the King of Spain turned up unexpectedly and Nigel was asked to find him a table in a restaurant that was already bulging at the seams. Such was the casual nature of life at La Cigale that even the King was obliged to wait an hour or so drinking his favorite whisky until a table became available. 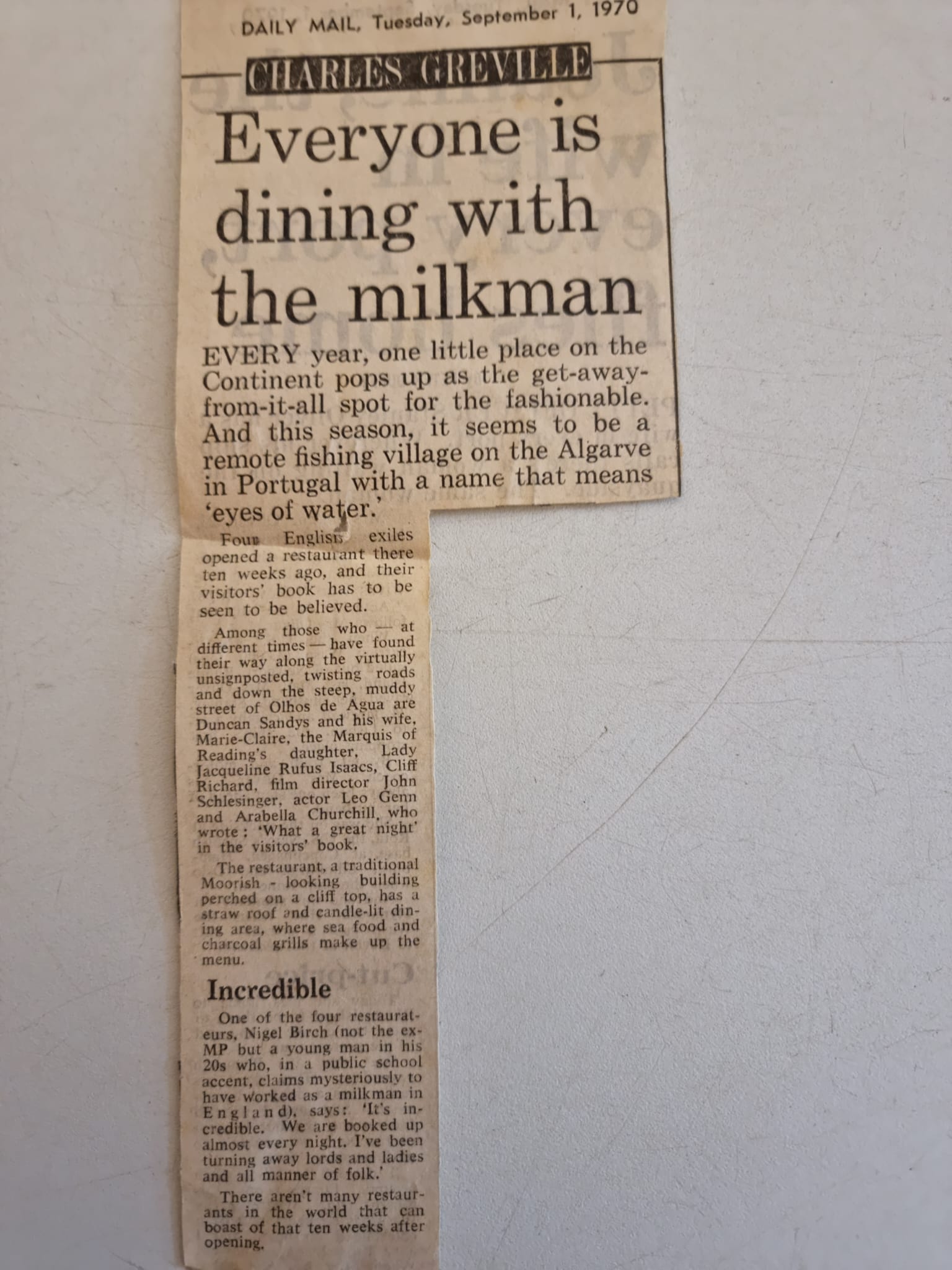 There was even a weekly piece in the Portuguese equivalent of The Daily Express detailing which particular celebrities had been seen partying the night away at the popular beach restaurant. Nigel and his family were often so busy running their enterprise that it was only when reading later newspaper reports that realisation dawned on who had paid them a visit. Very soon the hard-working restaurateurs had repaid all their debts and were ready to expand their business.

It was plain that for the foreseeable future this part of the Algarve would become their base and in 1971 Nigel and Lesley bought a 10 acre plot of land on which they built a home, and where they brought up their family of five children. During the early seventies, La Cigale thrived despite the Portuguese Revolution which occurred in April of 1974, and in 1976 they opened their second restaurant. In the meantime, Athol had married Lesley's sister and had similarly built their home nearby; four children followed and Nigel joked that between them they could almost put up a half-decent football team - a curiously prophetic throwaway remark in light of the current sporting activities of the youngest members in the family.

Back in La Cigale after 42 years, Nigel, Lesley and Sir Cliff

In 1978 after eight tough, but happy, years running their restaurants, the two families were made an offer they could not refuse and sold both businesses, thereby earning a much-needed break during which they contemplated the direction their lives would take.

Almost immediately Nigel bought another site and opened a fast-food outlet selling charcoal-grilled chicken with piri-piri baste. The magic touch had not deserted Nigel, as within a matter of days people were queuing around the block to sample the food, and in a very short time, a second Franguinho (baby chicken) was opened. In the mid-eighties, after several successful years, these were sold marking the end of the Birch's successful foray into the hospitality business and an exciting new chapter was about to unfold for this enterprising quartet. 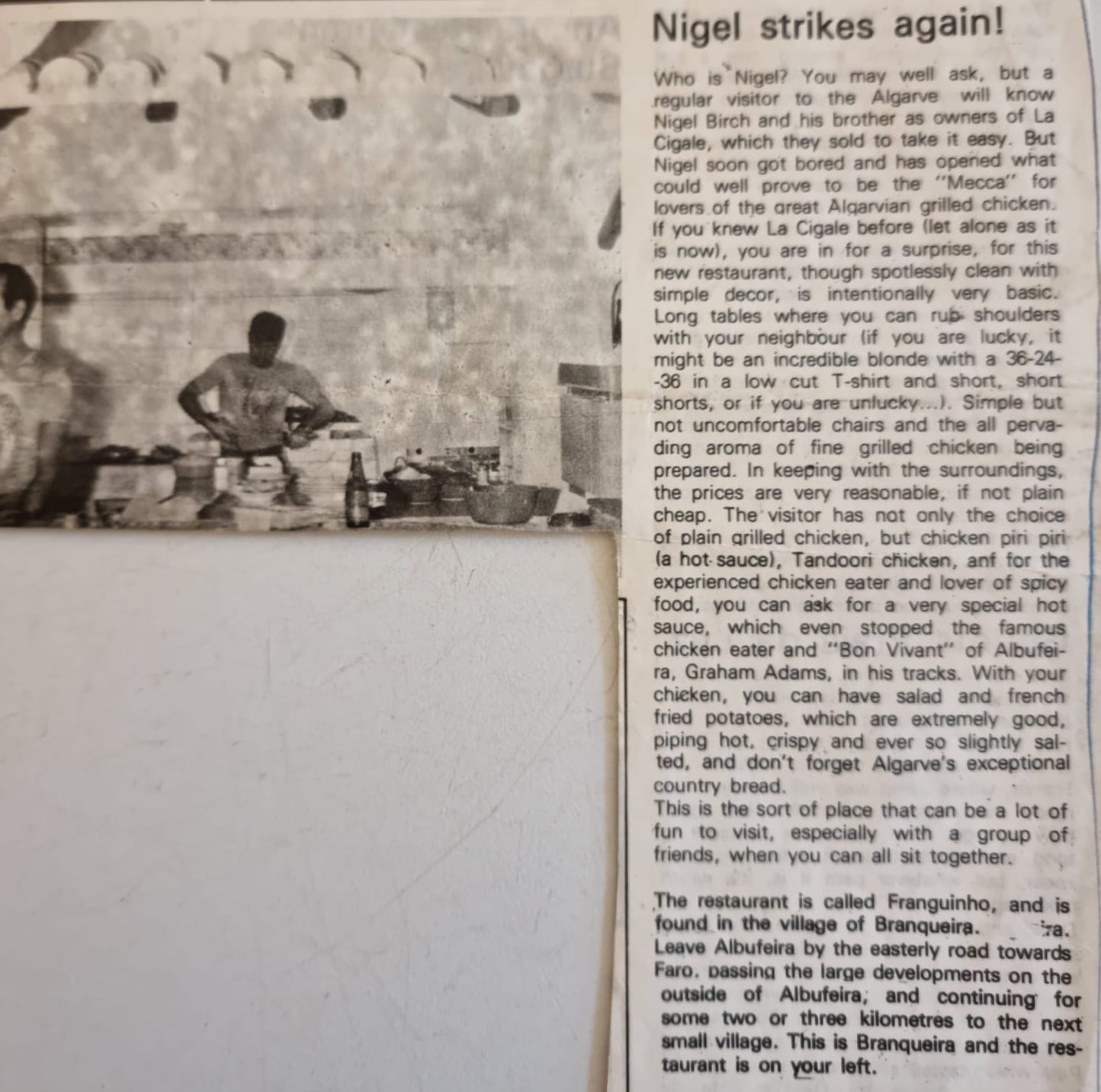 In part two of the story the brothers spread their wings, turning to avocado production, property development, and other business ventures but, as they were to discover, it was by no means a bed of roses and there were more than a few hiccups along their journey.