In the late 70s, with the fun-filled, frenetic days of 'La Cigale', and the establishment of more restaurants behind them, it was time for Nigel and Athol to seek out new opportunities and challenges. For a short spell of time the brothers went their separate ways, before joining up again later as business partners. 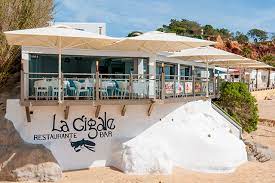 O Gallo, another restaurant the brothers opened in 1976.

But I am a little ahead of myself here, and need to rewind to the early and mid-seventies. This was a time when both families were expanding and the arrival of more children highlighted a need for regular schooling. This part of the Algarve was an underdeveloped part of Portugal with poor infrastructure, and schooling facilities were woefully inadequate, so the families employed a young local girl to run a playgroup at one of their houses and over time more children, including Portuguese boys and girls, joined the group. Eventually a well known local businessman built a new school which he named The Prince Henry International School after the famous fifteenth century Portuguese Prince and explorer, Henry the Navigator, and he persuaded Nigel and through him, the other parents to send their children to the new facility. Nigel became a member of the Board and having been tasked with the job of appointing a Headmaster he set off to London, circa 1976, to interview prospective candidates. As Nigel made his way to Curzon Street in Mayfair his mind turned back to his schooldays, and he wondered what his old Headmaster, 'Woof' Williamson would have made of the situation. Nigel's trip to London proved to be fruitless and in the end as the School Board decided to appoint a local Portuguese lady who spoke perfect English and could communicate with the English and Portuguese children in their own tongue.

In the early seventies Athol and Peta set up home in the same locality as Nigel and Lesley and years later, feeling a need to give something back to the area which had been so good to them, they too were determined to help the local community. Filling a need they became benefactors to the area when, in 1979, they built an orphanage on land they had given to the council and Peta, in particular, devoted much time and energy to their charity work. The young Brits were beginning to make their mark on The Algarve. 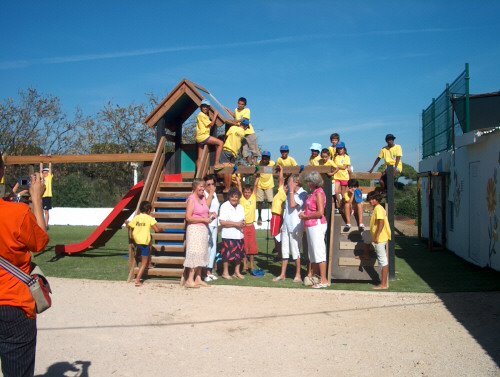 The orphanage which Peta and Athol named Pirilampos (Glow Worm)

By the early 1980s the roller coaster ride was about to begin and the journey would be bumpy at times for the young entrepreneurs as they set their sights on uncharted territory.

At this time there was no commercial avocado production in Europe and sometime around 1980 Nigel and Lesley bought a second farm with a view to producing this exotic fruit.

Of necessity this meant that Nigel would spend periods of time in California where he studied nursery practices required for the production of avocados from imported seeds. Simultaneously, Nigel and Athol had been planning the way forward and decided to develop their business by forming a group of related companies that would be vital for preparing the new farm for the planting of avocado liners (baby trees) and other future projects. Additionally, it was reasoned that these small self sufficient set-ups, comprising irrigation systems and installations, plant hire, a nursery complex, and a real estate business, would all be used by the local community and, in theory, would spread the overall financial risk. 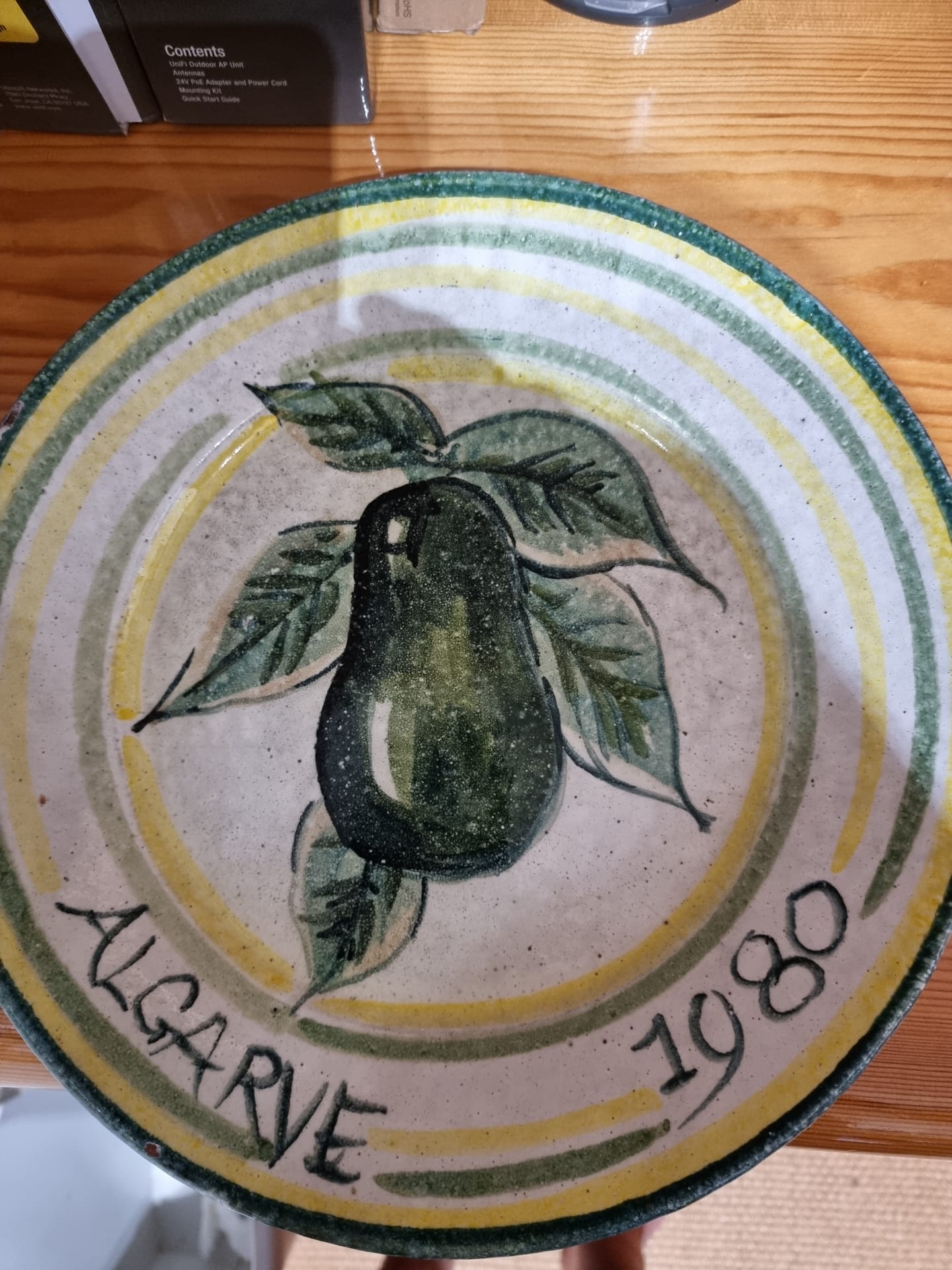 By the time Nigel returned from The University of California in 1983 armed with his certificate the farm was set up for planting the baby avocado trees and soon everything seemed to be going as planned with the irrigation and fertilizer systems all working well. Notwithstanding, all the local farmers thought this crazy Englishman was off his rocker as the avocado is a semi-tropical fruit which cannot tolerate frost, but Nigel's calculated gamble that the South facing, sloping land, close to the sea would not be affected by frost turned out to be well judged and they never had a problem with that.

For several years progress was made, but in 1987 disaster struck. Just as they were about to pick the first heavy crop the water in the well became saline. After two very dry years the well had run low and there was sea water infiltration, with a number of wells in the area suffering from the same problem. By a stroke of sheer bad luck their investment was lost, and Nigel grinned wryly as he told me, in his understated way, that the families were saddened and somewhat demoralised by the thought that all their good efforts on the avocado farm had come to naught. The well eventually recovered but by then the brothers had moved on and, to this day, Nigel and Athol are still growing avocados along with oranges, tangerines and lemons. Incidentally, the planting of avocado trees has recently been banned in Southern Algarve as they use up excessive amounts of precious water.

Fortunately other businesses in the group were thriving as they were providing much needed services and expertise to the commercial and farming community in Southern Algarve, and putting this failure behind them Nigel and Athol continued to develop the diverse aspects of their enterprise. 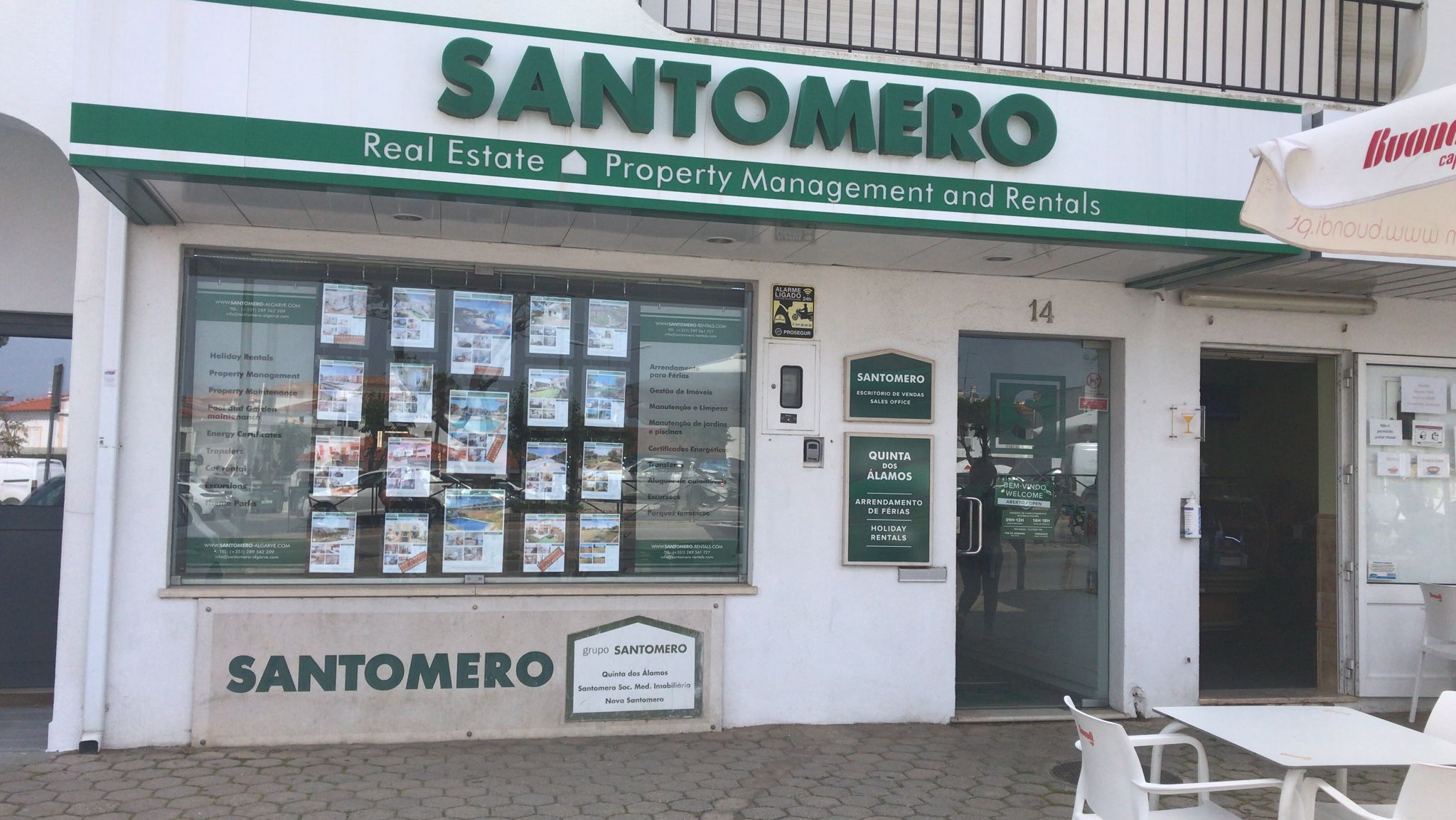 The real estate business established by Nigel and Athol in Guia during the early eighties is still flourishing and the Birch family retain close ties with the ex-partner, dearest friend and confidante, who now runs the business. However, in 1989, after having made a promising start with their construction business, they were adversely affected by the economic downturn that encompassed much of the Western world as it went into recession and for a time trading conditions were difficult, to say the least, for the greenhorn housing and property developers.

Below is an aerial shot of Quinta Dos Alamos, the large 150 house development undertaken by Nigel and Athol in the eighties and nineties. Nigel was responsible for the construction of the infrastructure on the 35 acre site, and he can be seen here playing with his toys, whilst Athol's spheres of influence were the houses themselves. 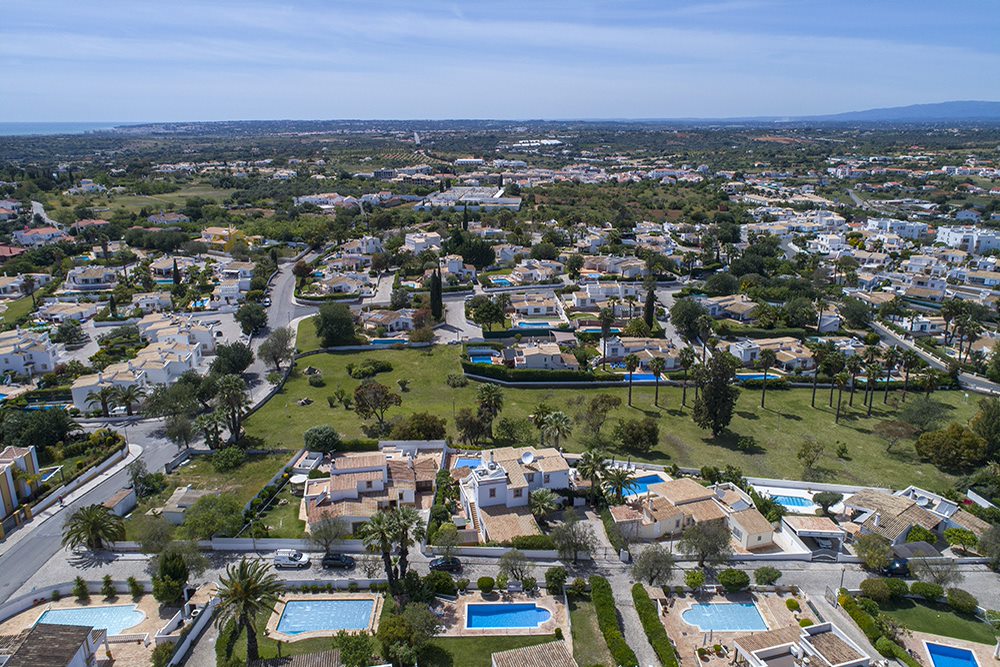 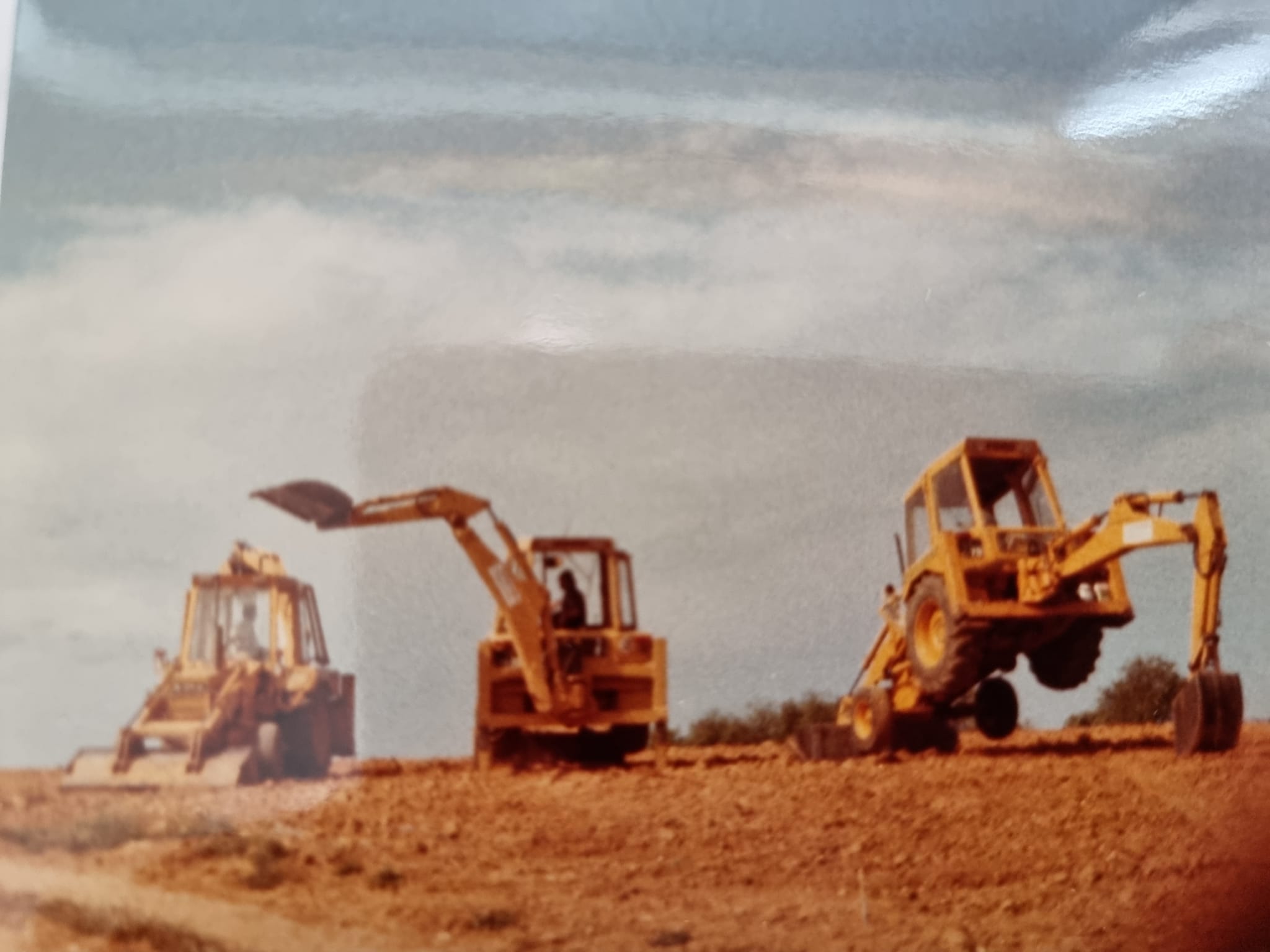 Boys and their toys!

As the years rolled by the brothers became involved in many different enterprises and a couple that were particularly close to Nigel's heart and gave him much pleasure over a period of fifteen years were a boating and fishing business called Cruzeiros da Oura, which is operating today, and a diving school which he called Atlantic Diving. One stand-out memory of this time was the day a club member, who happened to be a retired British police officer, came to tell Nigel that a number of small packages had washed up on the beach following a stormy night, and nobody knew what they were. They turned out to be blocks of hash and as word spread throughout the local community. 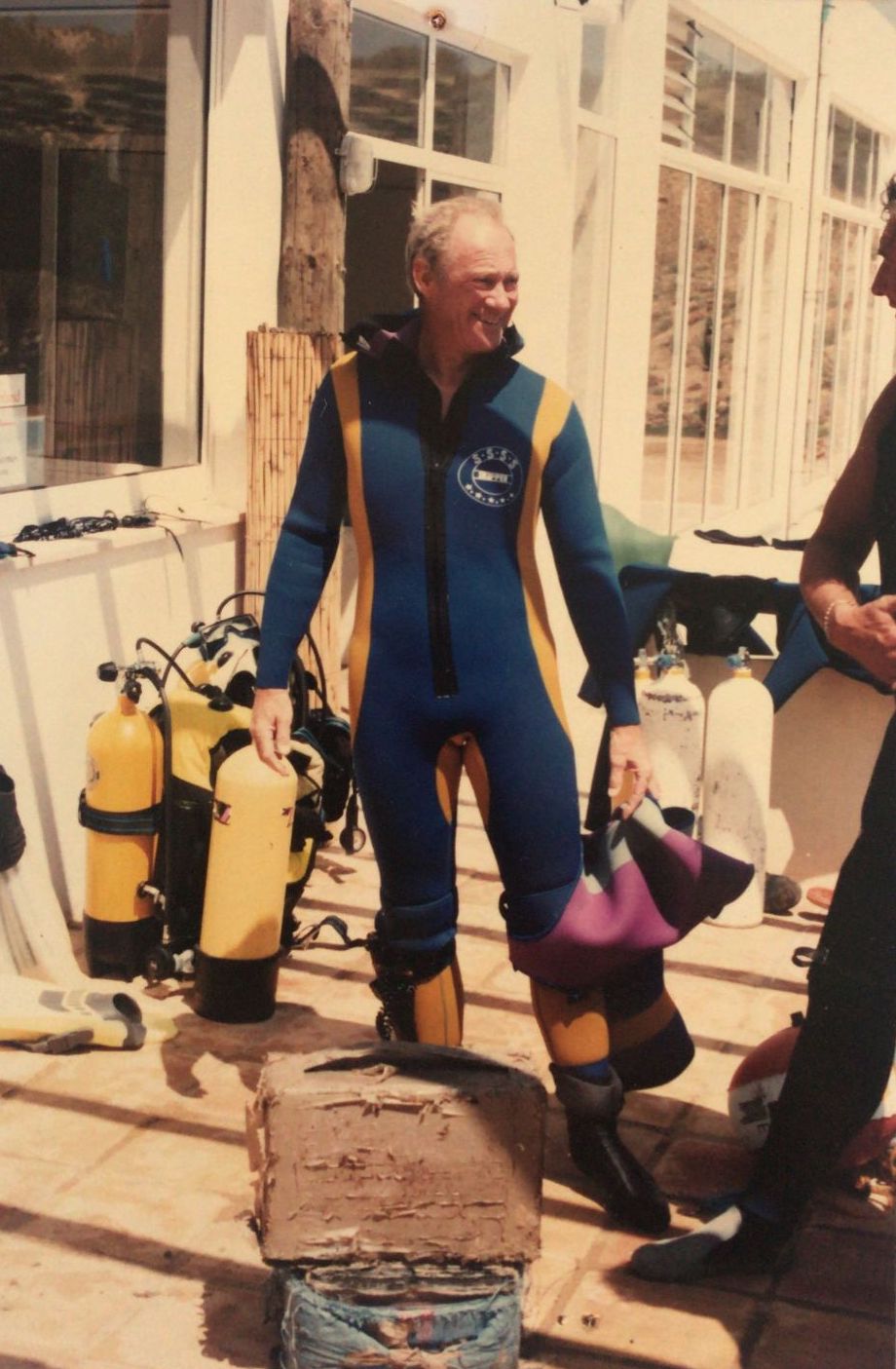 Nigel said the frantic activity on their beach was reminiscent of a scene from the 1949 Ealing comedy film Whisky Galore when bottles of scotch were washed up on a beach in Ireland following a shipwreck. It turned out to be a comedy of errors when Nigel was asked by the local police to investigate the possibility of there being more packages anchored to the seabed just a couple of hundred yards out from the shore. Nigel and his team of six scuba-divers did indeed find many more of the packages and, much to his amusement, he was asked by the local constabulary to store them at his clubhouse as they did not know what to do with them. They were left unattended on the veranda for several days as the police, distracted by the debate about what course of action should be taken, forgot to come and pick them up.

Below is a photograph of Nigel in his diving gear as he prepares to recover more of the packages and in the foreground of the picture you can see just two of the 100 blocks of hash that were discovered anchored to rocks on the sea bed.

The planting of his own vineyard, and the building of a winery in conjunction with Sir Cliff Richard whom he first met at La Cigale in 1971, is just another of Nigel's pet projects that gave him much satisfaction. It was during a period when Nigel was doing work for Cliff on various projects at his nearby property that they became friends, leading ultimately to their joint venture and construction of Adega Do Cantor in 2001. (Back L-R) Nigel, Lesley and Cliff

It is nigh impossible to do justice to Nigel Birch's career path in just two episodes, and much has been left unsaid, including the fascinating story of his ongoing 50 year friendship with Cliff. Nigel has been a close friend of the pop star for many years including the recent turbulent, traumatic ones, and he happened to be with Cliff in 2018 when he received news regarding the outcome of his harrowing privacy case against the BBC. Even though the Peter Pan of Pop is no longer living in Portugal they still keep in touch. 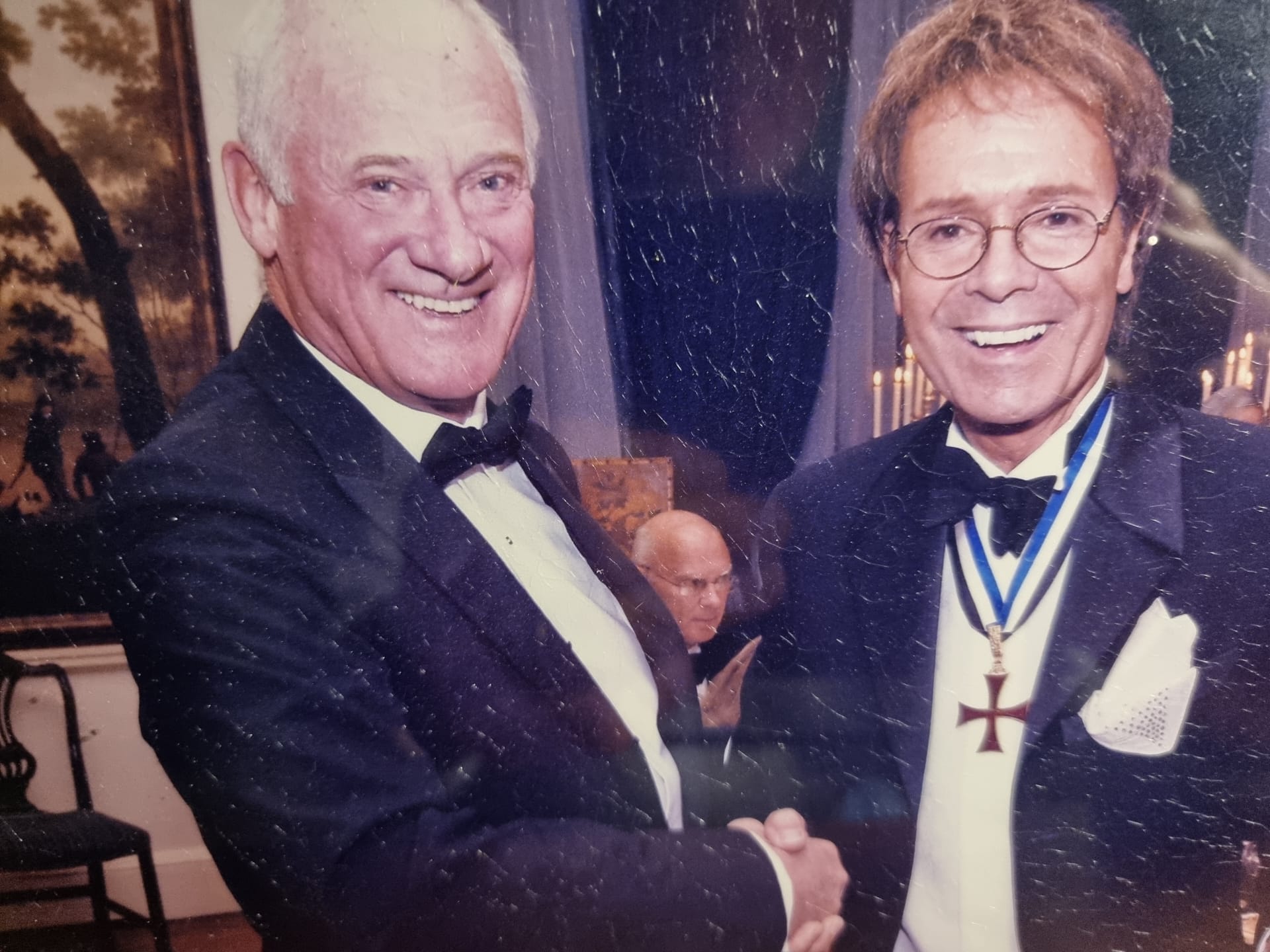 Nigel with Sir Cliff, receiving his Portuguese Knighthood at a dinner held at the Portuguese Embassy in London

Now, just turned 80, a spritely Nigel and his wife live in a beautiful part of Portugal where they put down roots almost 52 years ago, and having recently sold the vineyard estate and winery, his business brain and boundless energy are ruminating on what to do next. Athol still lives merely a stone's throw away. As an afterthought, Athol, who very modestly does not wish to detract from what he perceives to be largely Nigel's story, has penned a few memories which I have added below. At the age of 28, Nigel Birch left the UK for a break in Portugal and as events unfolded during that year it became clear that his future would be tied up with the sunny climes of … More...